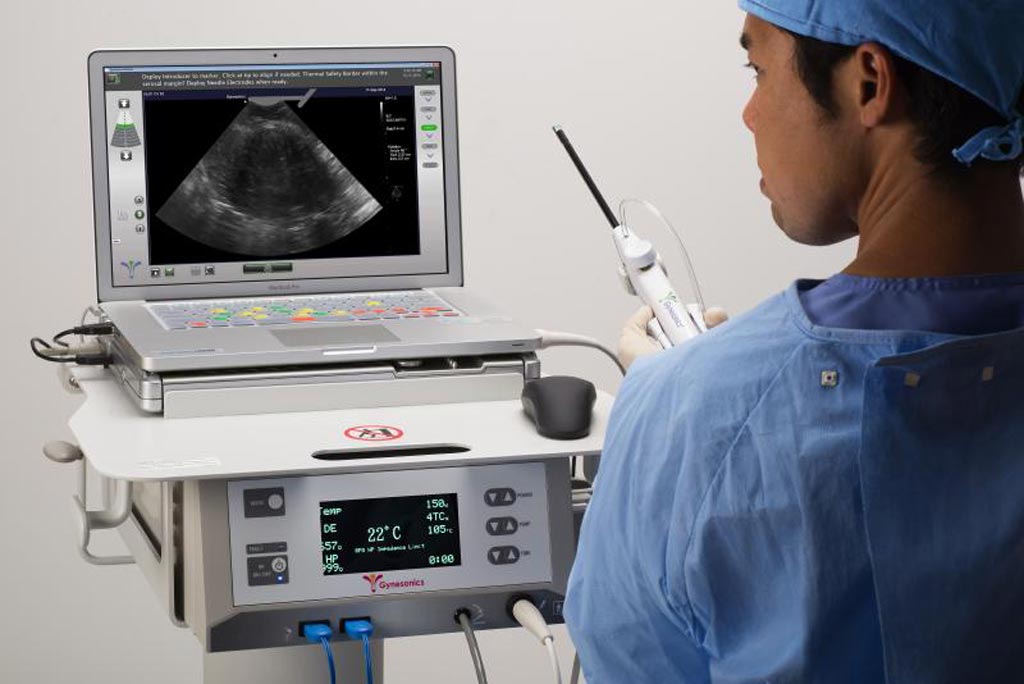 The Gynesonics (Redwood City, CA, USA) Sonata sonography-guided transcervical fibroid ablation system combines a miniaturized high-resolution intrauterine ultrasound (IUUS) probe with an RFA handpiece to create a compact delivery system that avoids the peritoneal cavity and tissue morcellation. The incisionless alternative to hysterectomy and myomectomy uses the proprietary setting margins of ablation in real time (SMART) Guide to provide a graphic overlay of the live ultrasound image for precise targeting and deployment of the RFA handpiece.

The graphic overlay is controlled by the operator directly from the RFA handpiece to determine the size and location of ablation, determine mechanical stops for introducer and needle electrode advancement, and plan the duration of RFA energy delivery. The ablation zone is marked on-screen within an inner red ellipse, with the thermal safety border marked by an outer green ellipse. By controlling energy levels, delivery time, and precise localization of the uterine fibroids, the Sonata system can deliver predictable ablations to a wide range of fibroids and avoid post-embolization syndrome.

“The patient outcomes achieved with Sonata demonstrate its potential to become a new standard of care in fibroid treatment, providing important patient benefits as compared to invasive surgery,” said Christopher Owens, president and CEO of Gynesonics. “Women are looking for new options to address this widespread condition, they want to preserve their uterus and they wish to avoid invasive surgery, including hysterectomy. Sonata provides a significant and durable improvement in symptoms, with more than half the women returning to normal activities within 24 hours.”

A uterine fibroid (leiomyomata) is a benign tumor originating from the myometrium, the smooth muscle layer of the uterus. Fibroids are often multiple, and if there too many to count, they are referred to as diffuse uterine leiomyomatosis. Fibroids are the most common benign tumors in females and typically found during the middle and later reproductive years. While most are asymptomatic, they can grow and cause heavy and painful menstruation, painful sexual intercourse, and urinary frequency and urgency.