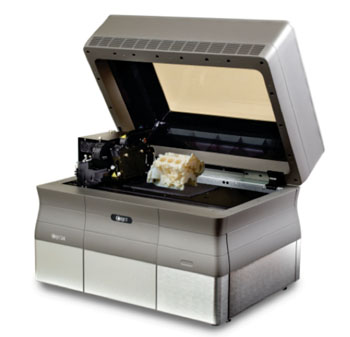 Stratasys (Rehovot, Israel) 3D printers have been installed in 12 National Health Service (NHS; London, United Kingdom) hospitals to support the validation of patient surgery prior to an operation.

The printers will be supplied by Replica 3DM (Salisbury, United Kingdom), which was first established as a three dimensional (3D) modeling department of Salisbury District Hospital. The company has now extended its medical 3D printing capabilities to NHS hospitals across the United Kingdom. The deployment includes Stratasys Objet24 and Objet30 Pro 3D printers, which will convert patient computerized tomography (CT) scans into physical printed models for use as presurgical guides.

The 3D printed models will help surgical teams in the re-bending of titanium implant plates to the patient's exact specifications, thus eliminating potential problems during operations. The models can also be used as a visual aid when explaining the surgical procedure to patients. Other benefits include preoperative investigations across maxillofacial, orthopedics, neurology, spinal and ears, nose and throat wards, to identify the correct procedure. The use of the printers will also help reduce surgical procedure times, which in turn could lead to an overall decrease in theatre costs.

“To us, 3D printing and the medical profession go hand-in-hand, particularly in the planning of complicated procedures. A 3D model equips surgeons with a hands-on perspective which cannot be achieved by looking at a computer screen,” said Matthew Sherry, managing director and founder of Replica 3DM. “They can easily rotate, inspect and analyze each surgical procedure on a case-by-case basis, enabling them to pre-bend implants knowing that they will perfectly fit the patient.”

“In an industry where precision is paramount, the ability to produce highly accurate 3D printed surgical models and guides that mimic the look and feel of titanium implants can both lower costs and reduce the time required for patients to be anesthetized,” added Chris Baker, Northern European territory manager at Stratasys. “As a result, an increasing number of hospitals worldwide are integrating 3D printing into surgical planning procedures, which is having an immediate positive impact on the quality of patient treatment.”