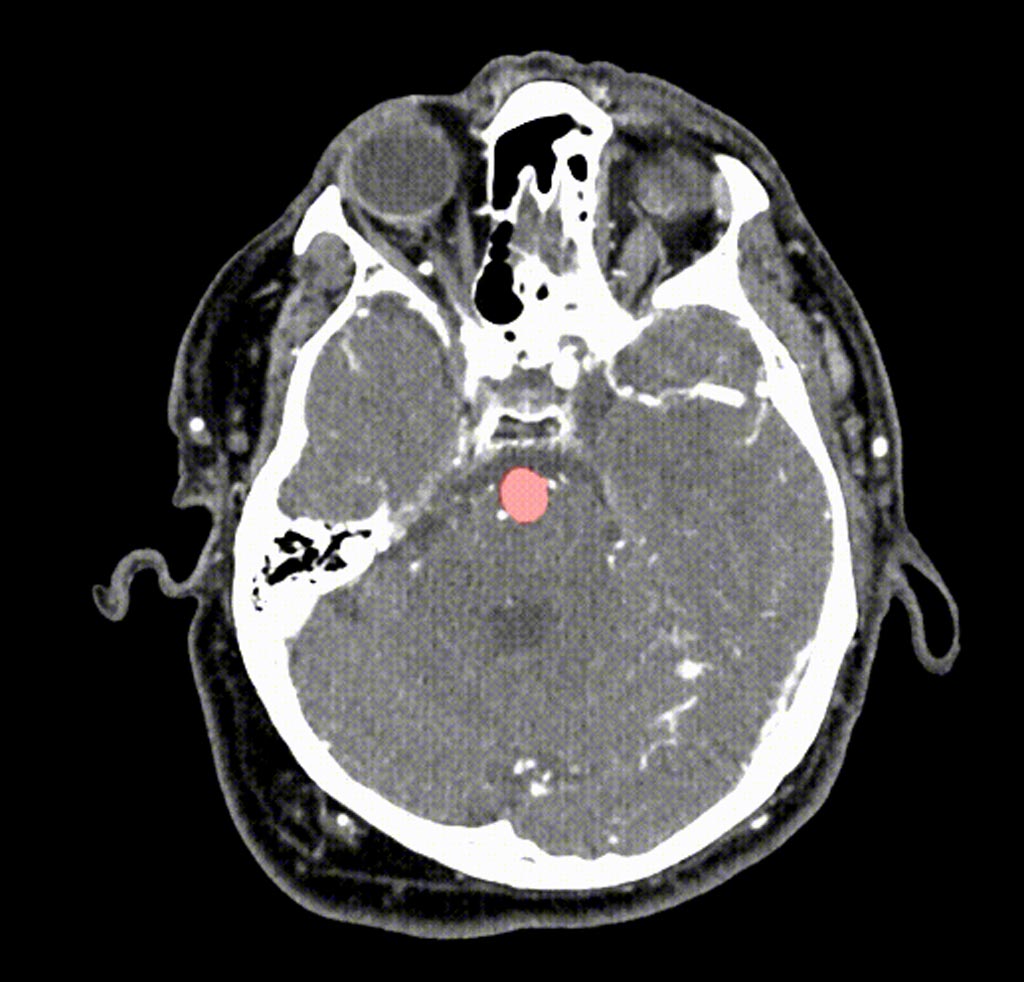 Image: In this brain scan, the location of an aneurysm is indicated by HeadXNet using a transparent red highlight (Photo courtesy of Allison Park).
Researchers from Stanford University (Stanford, CA, USA) have developed an artificial intelligence (AI) tool that can help radiologists improve their diagnoses of brain aneurysms by highlighting the areas of a brain scan that are likely to contain an aneurysm.

To overcome the inherent challenges of complex neurovascular anatomy and potential fatal outcome of a missed aneurysm, the researchers focused on creating an AI tool that could accurately process large stacks of 3D images and complement clinical diagnostic practice. The tool is built around an algorithm called HeadXNet which was trained by outlining clinically significant aneurysms detectable on 611 computed tomography (CT) angiogram head scans. The researchers focused on its ability to identify the presence aneurysms rather than on detecting their absence.

Following the training, the algorithm decides for each voxel of a scan whether there is an aneurysm present. As a result of the HeadXNet tool, the algorithm’s conclusions overlaid as a semi-transparent highlight on top of the scan. This representation of the algorithm’s decision allows clinicians to also see what the scans look like without HeadXNet’s input. HeadXNet was tested by eight clinicians who evaluated a set of 115 brain scans for aneurysm, once with the help of HeadXNet and once without. With the tool, the clinicians correctly identified more aneurysms, thereby reducing the “miss” rate, and were more likely to agree with one another. HeadXNet did not influence the time it took for the clinicians to decide on a diagnosis or their ability to correctly identify scans without aneurysms.

“There’s been a lot of concern about how machine learning will actually work within the medical field,” said Allison Park, a Stanford graduate student in statistics and co-lead author of the paper published in JAMA Network Open. “This research is an example of how humans stay involved in the diagnostic process, aided by an artificial intelligence tool.”

HeadXNet’s success in these experiments is promising and the machine learning methods at its heart could likely be trained to identify other diseases inside and outside the brain. For example, the researchers imagine a future version could focus on speeding up identifying aneurysms after they have burst, saving precious time in an urgent situation. However, the researchers have cautioned that further investigation is needed to evaluate generalizability of the AI tool prior to real-time clinical deployment due to differences in scanner hardware and imaging protocols across different hospital centers.

“Because of these issues, I think deployment will come faster not with pure AI automation, but instead with AI and radiologists collaborating,” said Andrew Ng, adjunct professor of computer science and co-senior author of the paper who leads Stanford’s Machine Learning Group. “We still have technical and non-technical work to do, but we as a community will get there and AI-radiologist collaboration is the most promising path.”