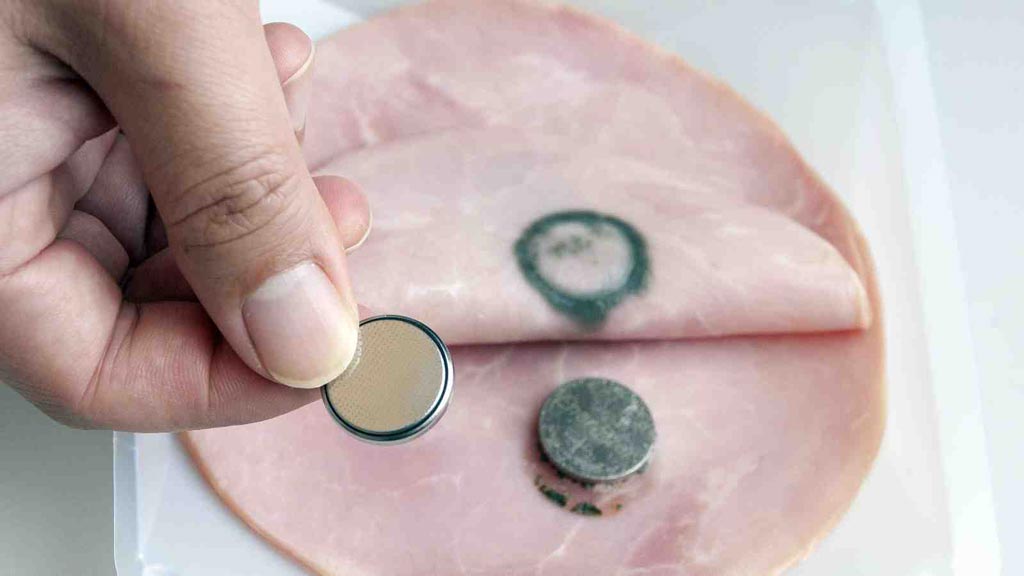 Image: New research shows that battery buttons can cause severe damage to tissues when swallowed (Photo courtesy of VUW).
A novel coating made of nontoxic alkaloids and bitter tasting compound triggers a pungent taste that causes infants to expel a button battery rather than swallow it.

Developed at Victoria University of Wellington (VUW; New Zealand), the battery coating dissolves when coming in contact with saliva, turning it blue, thus alerting parents or caregivers that a child has ingested a battery. At the same time, bitter flavorings in the coating dissuade ingestion and an emetic compound triggers vomiting, which may lead to expulsion of the battery, or at least alert the caregivers to the issue. The compound can also be incorporated into an applicator that can be used to mark unprotected batteries and other small objects with a choking risk.

“The problem is that parents don't always know that ingestion has occurred, because the batteries are so small and young children can't communicate that they have swallowed something,” said technology developer Jeongbin Ok, MID, of the VUW School of Design. “It has always been my dream to help save lives. I hope this coating can play a part in doing so by creating an invention that has global implications for the safety of children. I hope to see mass production of this coating and to see it become an industry standard.”

“This is a very exciting innovation and a great example of Kiwi ingenuity addressing a very real and serious hazard in a practical and cost-effective way,” said Martin Rushton, of the New Zealand Ministry of Business, Innovation, and Employment (MBIE). “This 'early warning' system will complement other measures around warnings and education, and we are encouraging battery manufacturers get behind improving consumer safety. Parents and caregivers will, I am sure, be keen to see button batteries with this feature, to help safeguard infants and young children.”

Button batteries are highly corrosive and can cause serious tissue damage and even fatalities within two hours of ingestion. The swallowed battery typically gets lodged in the esophagus, where it reacts with body fluids, completing a circuit, which results in the production of toxic hydroxide. The local build-up of this caustic chemical can cause tissue necrosis, throat damage, and even death. Battery ingestion causes around 3,000 annual hospitalizations in the United States alone.