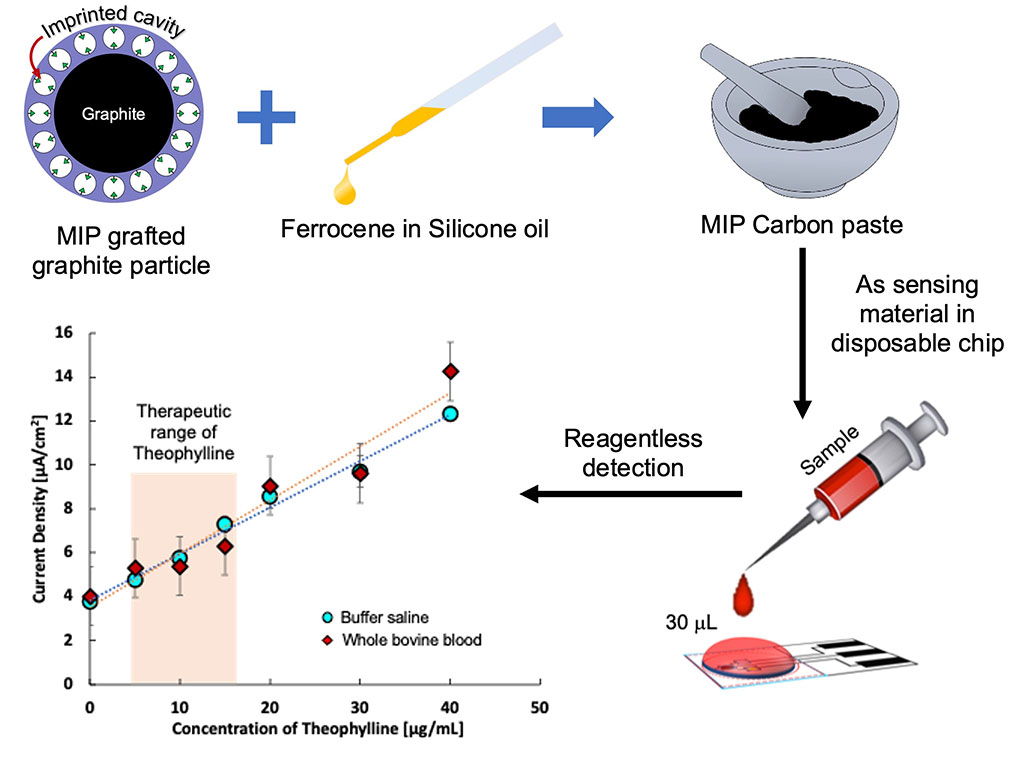 Theophylline (THO) is effective in treating respiratory problems and inflammation, although the drug can be toxic if taken above certain limits. This demands accurate and rapid sensing devices that can closely monitor THO levels in patients. Scientists have now designed a paper-based THO sensor with a response time of three seconds. The sensor is not only easy to use but also economical and can reduce the burden of drug analysis in developing countries. Additionally, its prototype can be used to develop a bedside therapeutic drug monitoring system.

The highly selective and sensitive sensor was developed by a team of researchers from Shibaura Institute of Technology (SIT, Tokyo, Japan) who also successfully tested it using whole bovine blood. THO is a natural organic compound whose molecular structure is very similar to that of caffeine present in coffee and cacao. Over the years, due to its therapeutic properties, THO has become one of the most widely studied xanthine group derivates. THO is used to dilate respiratory passages in people having difficulty breathing, and as a muscle relaxant, anti-asthmatic, and diuretic (drugs used to increase urine production and reduce blood pressure). It is also known to have anti-inflammatory and anti-tumor properties, and can regulate our immune responses too.

While THO is beneficial in treating a number of conditions, the drug has a very narrow therapeutic window. This means it can create adverse effects if administered beyond a certain limit (and that limit can be quite easily reached). An accidental or deliberate overdose can be highly toxic and lead to problems such as seizures, rapid heartbeats, excitation of the nervous system, or even death. This makes close monitoring of THO levels during therapy extremely crucial. Therapeutic drug monitoring is essential for optimizing the effects of treatments such as chemotherapy, which require strict control over the drug’s concentration in the patient’s blood to prevent severe side effects. However, most monitoring techniques are often time-consuming and demand complex procedures that can only be carried out by an expert. The same goes for THO detection methods.

To alleviate these problems, researchers over the years have developed low-cost electrochemical methods that are simple, highly sensitive, and rapid. One of these, a class of electrochemical tools that has recently gained momentum, is molecularly imprinted polymers (MIPs). These tools have tailor-made molecular cavities that can recognize and bind to specific target molecules, just like receptors in our own body would. Their ability to do so is being widely used in several applications, including drug detection. In the new study, the SIT scientists developed a disposable, paper-based THO sensor consisting of an electrode made of molecularly imprinted graphite. Since MIPs are designed using the target molecule as a template, the team used THO as a template when developing the sensor’s carbon-based electrode paste. The synthesized paste was then loaded onto a printed sensor chip and its THO detection abilities were tested.

The sensor was found to be highly sensitive (meaning it could detect even small amounts of THO and showed great selectivity towards the drug. In fact, the sensor could identify THO even in samples with THO concentrations as low as 2.5 µg/mL (µg=microgram, i.e., 1/1000 of a milligram). And what’s more, this sensor needs only 3 seconds to detect THO! It could do so even in whole bovine blood. This portable, low-cost, reliable, and rapid sensor has long-term stability and can be used for the real-time detection of drugs like THO without us depending on sophisticated equipment. Furthermore, the fabrication strategy provided in this study can be used to develop efficient electrochemical sensors for various other clinical interventions.

“Existing methods for the analysis of the drugs in blood are expensive and need specialized equipment. This can be a problem for developing countries dealing with a lack of resources and technicians,” said Assistant Prof. Aaryashree. “The paper-based sensor that we have developed is not only easy to use but also economical and can reduce the burden of drug analysis in developing countries. Further, its prototype can be used to develop a bedside therapeutic drug monitoring system, which will alert us of any overdose, avoiding side effects in patients taking these drugs.”