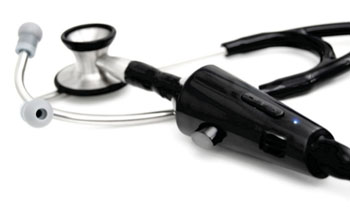 The Eko Core next generation digital stethoscope attachment is designed to be inserted into the tubing of traditional Littmann Cariology III-style stethoscopes, enabling clinicians to switch between analog and digital modes. Using a Bluetooth-connected mobile app (currently available only for Apple devices), clinicians can study a visual representation of the heart sound waveform, save the heart sounds directly to a patient’s electronic health record (EHR), and securely collaborate with a cardiologist for a second opinion.

The Eko Core, a product of Eko Devices (Berkley, CA, USA), will also be available as a fully digital device for doctors willing to forgo analog auscultation entirely. The company, which has already established EHR partnerships with Dr. Chrono, Allscripts (Chicago, IL, USA), Practice Fusion, Cerner (Kansas City, MO, USA), Epic, and Athena Health, is also working on a groundbreaking algorithm, which they call “the Shazam for heartbeats,” that will support decision-making and will be included in the mobile app.

“One of the most exciting aspects of having digital heart sounds would be the ability to provide clinicians with decision care support,” said Jason Bellet, chief operating officer of Eko Devices. “We are working with scientists and some cardiology advisors to build out a decision support algorithm that will help clinicians at the point of care determine characteristics of heart sound, such as a murmur, intensity, and location, and then ultimately be able make more informed care decisions.”

“The stethoscope is an iconic and universal part of medical practice, a tool which nearly every doctor, nurse, and student learns to use,” said cardiologist John Chorba, MD, of the University of California, San Francisco (UCSF, USA). “The beauty of the Eko Core is that it captures the heart sounds in a streamlined way that has never been done before, interfacing seamlessly into our traditional exam without requiring any extra effort.”