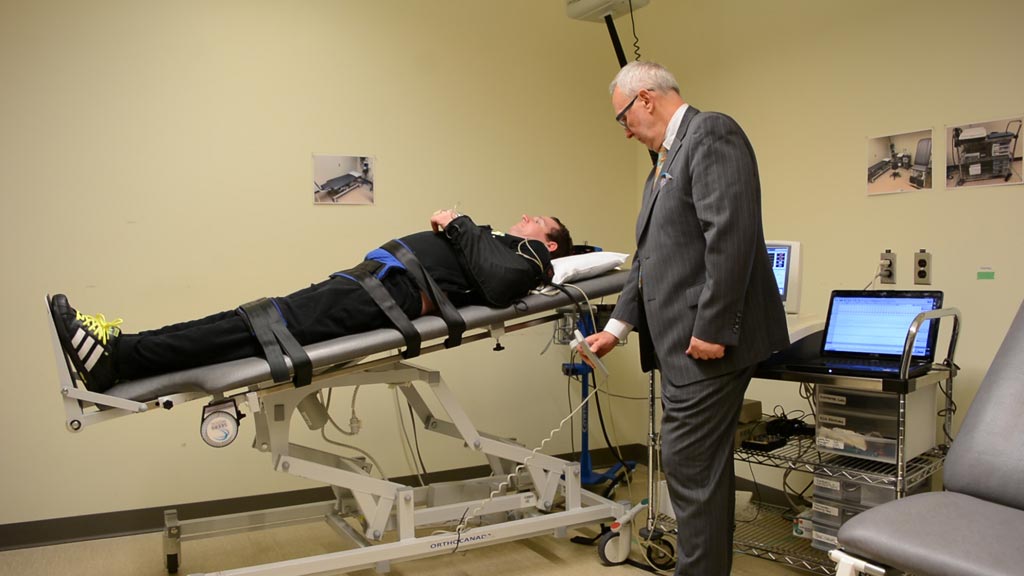 Researchers at the University of British Columbia (UBC; Vancouver, Canada) conducted an experimental study in a man in his early 30’s with a chronic C5 motor-complete SCI to investigate if lumbosacral epidural stimulation could be optimized so as to control cardiovascular functions, especially blood pressure (BP). The patient was fitted with an epidural spinal cord stimulation unit and implanted with the Medtronic Specify 5-6-5 electrode array at T11-L1 vertebral levels, with placement confirmed via radiography.

A series of tests were undertaken to determine the optimum stimulation parameters to increase BP in the seated position. On the main experimental day, the researchers assessed beat-by-beat BP via finger photoplethysmography, cardiac function using transthoracic echocardiography, cerebral blood flow and neurovascular coupling by transcranial Doppler, and trunk/lower-limb electromyography. All procedures were initially assessed in the supine position and then in response to a 60° head-up tilt, both with and without epidural stimulation. The patient then applied different programs for up to 45 minutes each day, transmitting electrical impulses that mimicked signals emanating from the brain.

The results revealed that stimulation resolved the orthostatic hypotension, a debilitating and prevalent condition in SCI, with the rise in BP in response to stimulation well controlled. In addition, stimulation prevented orthostatic-induced decrease in middle cerebral artery blood flow, improved neurovascular coupling, and resolved orthostatic-induced symptoms, including light-headedness, dizziness, and poor concentration that were self-reported without stimulation. The stimulation also prevented reduction in end-diastolic volume during tilt, thereby preserving stroke volume and cardiac output. The study was published on February 19, 2018, in JAMA Neurology.

"Mobility issues or paralysis are the most visible consequences of a spinal cord injury, but as a clinician, I know that many of my patients suffer from other 'invisible' consequences. Many of my patients have abnormal blood pressure and bladder, bowel, and sexual dysfunctions that can be quite devastating,” said senior author Professor Andrei Krassioukov, MD, PhD. “These preliminary data suggest that epidural neuroprosthetics may provide an important complement to pharmacological agents that are often slow-acting with undesirable adverse effects.”