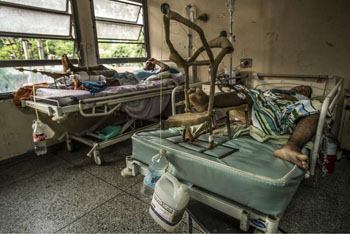 Image: Patients in the orthopedic ward at Luis Razetti Hospital (Puerto La Cruz, Venezuela) (Photo courtesy of the NYT).
An economic crisis fueled by rampant corruption and chaos have resulted in a medical crisis that is sweeping Venezuela, with no solution in sight.

A report by Sky News (Osterely, United Kingdom), which secretly filmed three major hospitals both inside and outside the capital Caracas, reveals a bleak picture of the healthcare situation in Venezuela, once the richest country in Latin America. The crumbling health service has almost no supplies of medicine or medical equipment, patients lie in filthy wards with no air conditioning and no clean water, and bodies are left on hospital beds in corridors because the morgues are full and the refrigerators are broken.

There is little running water to clean clogged and filthy toilets and showers, no cleaning products for the staff, and barely edible meagre quantities of poor food supplied to the patients irregularly. Usually, the families of those admitted to the hospital must provide their medicine, bedding, food, drinking water, and soap and water for personal hygiene. Without the aid of their families, the patients would receive nothing but the expertise of health staff, who are battling to keep people alive who normally would not have life-threatening illnesses.

Vector-borne diseases such as chikungunya and Zika are on the rise, and it estimated that Venezuela may have as many as 500,000 Zika cases, a number that is expected to rise without the necessary health infrastructure in place to help stop its spread. Malaria has also made a comeback in Venezuela due to the lack of clean water and stagnant reservoirs in the countryside. In addition, rising food costs coupled with severe food shortages are causing many families to face a malnutrition crisis.

“People are dying because we cannot treat them; there is nothing I can do for them. We don't get the medicine we need and even if there was a supply they don't ask us what we want. This populist government says it is here to favor the poor, it is a complete lie,” said oncology consultant Gabriel Romero, MD. “After spending and looting, this government has destroyed the country and it is drowning in misery and desolation.”

“For lack of something as simple as an IV bag, people can die. The pharmaceutical chamber says that there is currently a 90% shortfall of medications because there is a shortage of raw materials,” said Janeth Márquez, director of Caritas Venezuela (Caracas). “If before 100 people a month came asking for medical help, that is now multiplied by 100. People are coming to us for help with diabetes, cholesterol, and high blood pressure.”

Despite having the largest known reserves of oil in the world and led by a socialist government founded by Hugo Chavez with a mission to alleviate poverty for the masses, Venezuela is on the brink of financial and social collapse resulting from a mixture of socialist price controls, rampant inflation, widespread corruption, and a chronic black market, which have led to a shortage of essential goods across the country. The International Monetary Fund (IMF; Washington, DC, USA) estimates that the economy is rapidly contracting, and that runaway inflation is expected to reach 720% by the end of 2016.