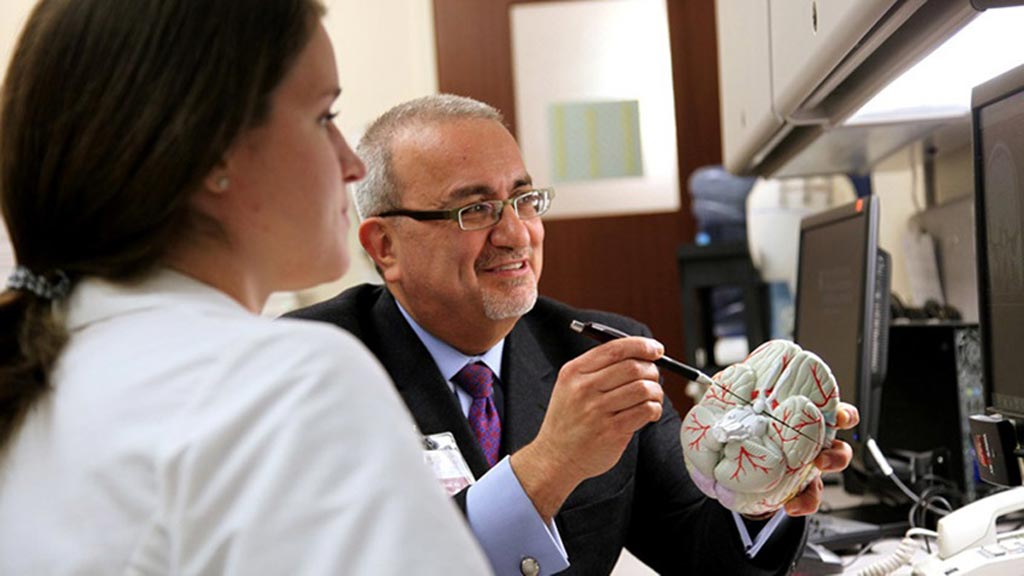 Image: Professor Issam Awad demonstrating the MISTIE procedure (Photo courtesy of University of Chicago).
The greater the volume of blood removed from the brain following cerebral hemorrhage, the greater the odds of better functional recovery, claims a new study.

Researchers at Johns Hopkins University (JHU; Baltimore, MD, USA), the University of Chicago (IL, USA), and 76 other hospitals in the USA, Canada, Europe, Australia, and Asia conducted a phase 3 clinical trial in order to assess if minimally invasive catheter evacuation of blood clots, followed by thrombolysis (with the aim of decreasing the clot size to 15 mL or less), could improve functional outcome in 242 patients (average age 62 years, 63% male) who underwent an intracerebral hemorrhage (ICH) event.

The procedure, called minimally invasive surgery plus alteplase for intracerebral hemorrhage evacuation (MISTIE) starts with computerized tomography (CT)-based navigation to develop a surgical approach plan, after which a rigid cannula is placed in the middle of the intracerebral blood clot. Surgeons then insert a soft drainage catheter, which facilitates up to nine injections of alteplase and passive clot removal. Evacuation is stopped when a hematoma size of 15 mL or less is achieved, as confirmed by daily CT scans.

Study results revealed that at one year, the proportion of patients with a modified Rankin Scale (mRS) score of 3 or less was not significantly higher in patients treated with the procedure (45%), compared to those who received standard medical care (41%). However, exploratory secondary analysis found that among the 58% of patients who had their hematoma reduced to a volume of 15 mL or less, there was a 10.5% difference in the likelihood of achieving a good functional outcome. The study was presented at the annual International Stroke Conference, held during January 2019 in Honolulu (Hawaii, USA).

“When assessing the results of surgery for brain hemorrhage, it is critical to consider how much blood was successfully evacuated. Unless a large majority of clot is removed and only a very small residual of blood is left, the full benefits of surgery will not be realized,” said senior author Professor Issam Awad, MD, MSc, of the University of Chicago. “This had never been considered as a factor in the success or failure of such surgeries, and cannot be taken for granted.”

Acute stroke due to supratentorial ICH is associated with high morbidity and mortality. Trials have not shown a benefit of hematoma evacuation with open craniotomy, and current guidelines have called for more evidence before making any recommendations about routine use of surgical interventions in this setting.