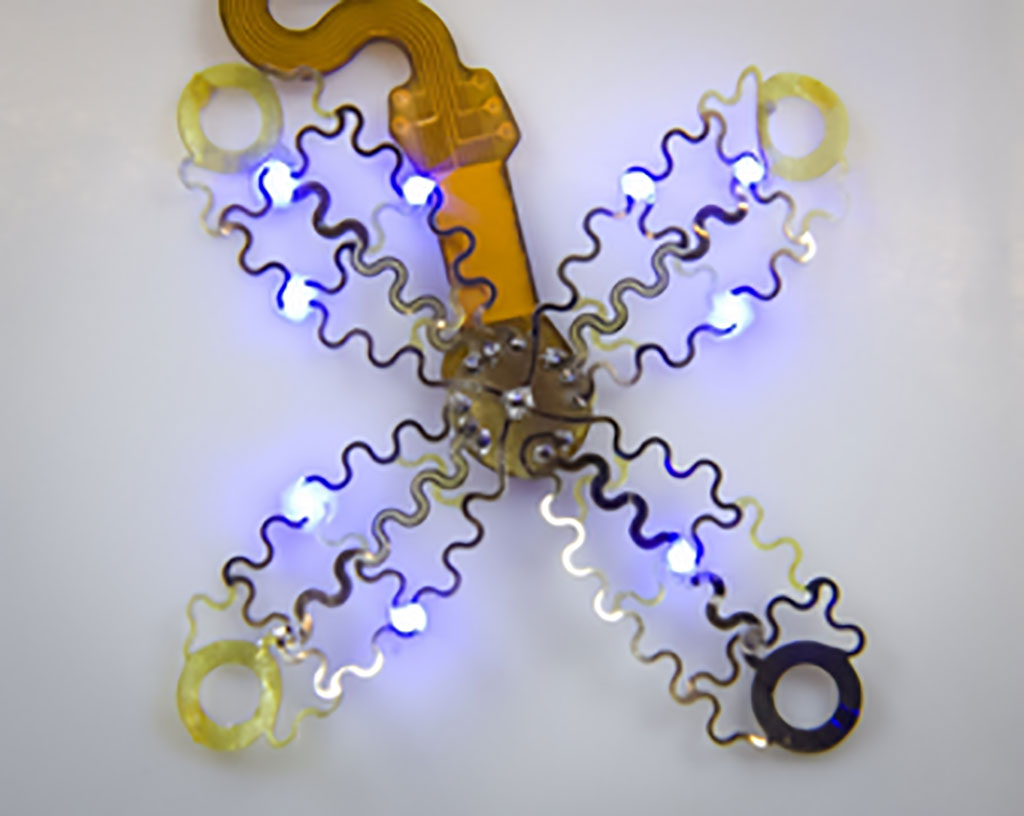 Atrial fibrillation – a form of irregular heartbeat, or arrhythmia – is estimated to affect approximately 60 million people across the world. Pacemakers are lifesaving devices that regulate the heartbeats of people with chronic heart diseases like atrial fibrillation and other forms of arrhythmia. However, pacemaker implantation is an invasive procedure, and the lifesaving pacing the devices provide can be extremely painful. Additionally, pacemakers can only be used to treat a few specific types of disease. Now, a team of researchers has designed a wireless, battery-free pacemaker that could be implanted with a less invasive procedure than currently possible and would cause patients less pain.

Currently available pacemakers work by implanting one or two leads, or points of contact, into the heart with hooks or screws. If the sensors on these leads detect a dangerous irregularity, they send an electrical shock through the heart to reset the beat. The new device developed by a team of researchers at the University of Arizona (Tucson, AZ, USA), which has not yet been tested in humans, would allow pacemakers to send much more targeted signals using a new digitally manufactured mesh design that encompasses the entire heart. The device uses light and a technique called optogenetics.

Optogenetics modifies cells, usually neurons, sensitive to light, then uses light to affect the behavior of those cells. This technique only targets cardiomyocytes, the cells of the muscle that trigger contraction and make up the beat of the heart. This precision will not only reduce pain for pacemaker patients by bypassing the heart's pain receptors, it will also allow the pacemaker to respond to different kinds of irregularities in more appropriate ways. For example, during atrial fibrillation, the upper and lower chambers of the heart beat asynchronously, and a pacemaker's role is to get the two parts back in line.

To ensure the light signals can reach many different parts of the heart, the team created a design that involves encompassing the organ, rather than implanting leads that provide limited points of contact. The new pacemaker model consists of four petal-like structures made of thin, flexible film, which contain light sources and a recording electrode. The petals, specially designed to accommodate the way the heart changes shape as it beats, fold up around the sides of the organ to envelop it, like a flower closing up at night.

Because the system uses light to affect the heart, rather than electrical signals, the device can continue recording information even when the pacemaker needs to defibrillate. In current pacemakers, the electrical signal from the defibrillation can interfere with recording capabilities, leaving physicians with an incomplete picture of cardiac episodes. Additionally, the device does not require a battery, which could save pacemaker patients from needing to replace the battery in their device every five to seven years, as is currently the norm.

"All of the cells inside the heart get hit at one time, including the pain receptors, and that's what makes pacing or defibrillation painful. It affects the heart muscle as a whole," said Philipp Gutruf, a biomedical engineering assistant professor and Craig M. Berge Faculty Fellow. "Current pacemakers record basically a simple threshold, and they will tell you, 'This is going into arrhythmia, now shock!' But this device has a computer on board where you can input different algorithms that allow you to pace in a more sophisticated way. It's made for research."