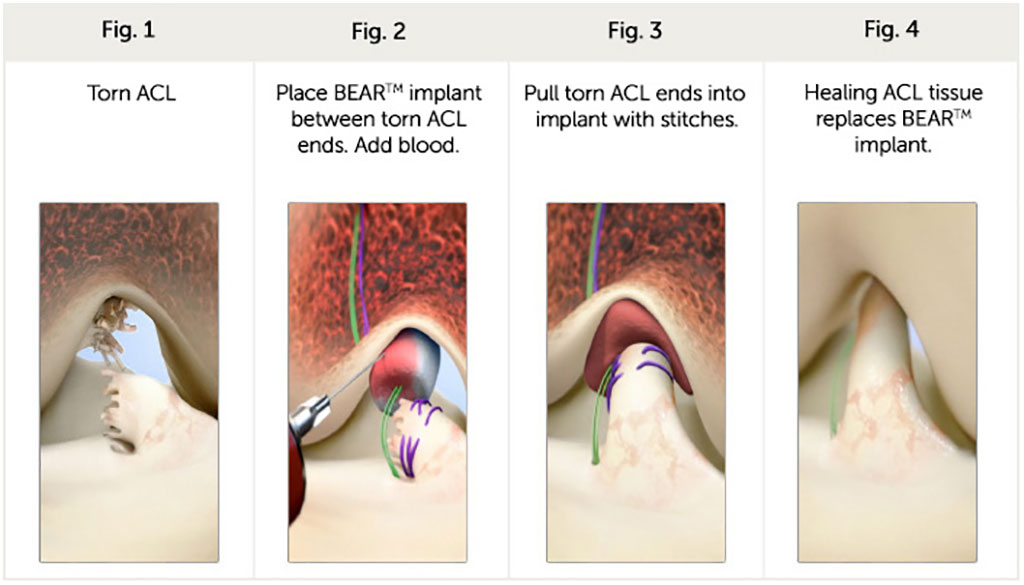 Image: An ECM implant repairs a torn ACL (Photo courtesy of Miach Orthopaedics)
A novel implant acts as a biological bridge between the two ends of a torn anterior cruciate ligament (ACL) to facilitate healing.

The Miach Orthopaedics (Westborough, MA, USA) Bridge-Enhanced ACL Repair (BEAR) implant is designed to restore natural anatomy and function of the knee. The implant, which is comprised of a proprietary blend of extracellular matrix (ECM) proteins and collagen, is stitched into place during arthroscopy between the torn ends of the ACL and then injected with the patient’s blood, which clots in the implant. The BEAR is held in place long enough for the body to heal the torn ends of the ACL back together, while maintaining its original attachments to the femur and tibia. As the ACL heals, the BEAR implant is absorbed by the body, within approximately eight weeks.

Unlike surgical ACL reconstruction, which is the current standard of care, the implant does not require a second surgical wound site to remove a healthy tendon from another part of the leg, or implanting a deceased donor's tendon. The BEAR implant is indicated for skeletally mature patients at least 14 years of age with a complete rupture of the ACL, as confirmed by magnetic resonance imaging (MRI). Patients must have an ACL stump attached to the tibia to construct the repair, and the device must be implanted within 50 days of injury.

“Preserving a patient's native ACL instead of replacing it with a graft has long been a goal of surgeons, and before the BEAR implant, multiple approaches were studied and failed,” said Martha Shadan, CEO and president of Miach Orthopaedics. “The BEAR implant, which is the first medical technology to show that it enables a patient's own torn ACL to heal, represents the first substantial advancement in the treatment of ACL tears in decades, and has the potential to change the standard of care.”

The ACL is a broad, thick collagen cord that originates on the anterior portion of the femur in the intercondylar notch and inserts on the posterior aspect of the tibial plateau. The ACL guides the tibia through a normal, stable range of motion, along the end of the femur, maintaining joint stability. The ligament is unfortunately poorly vascularized, and thus has no ability to heal itself after a complete tear, leading to further destruction of the articular and meniscal cartilage over time.