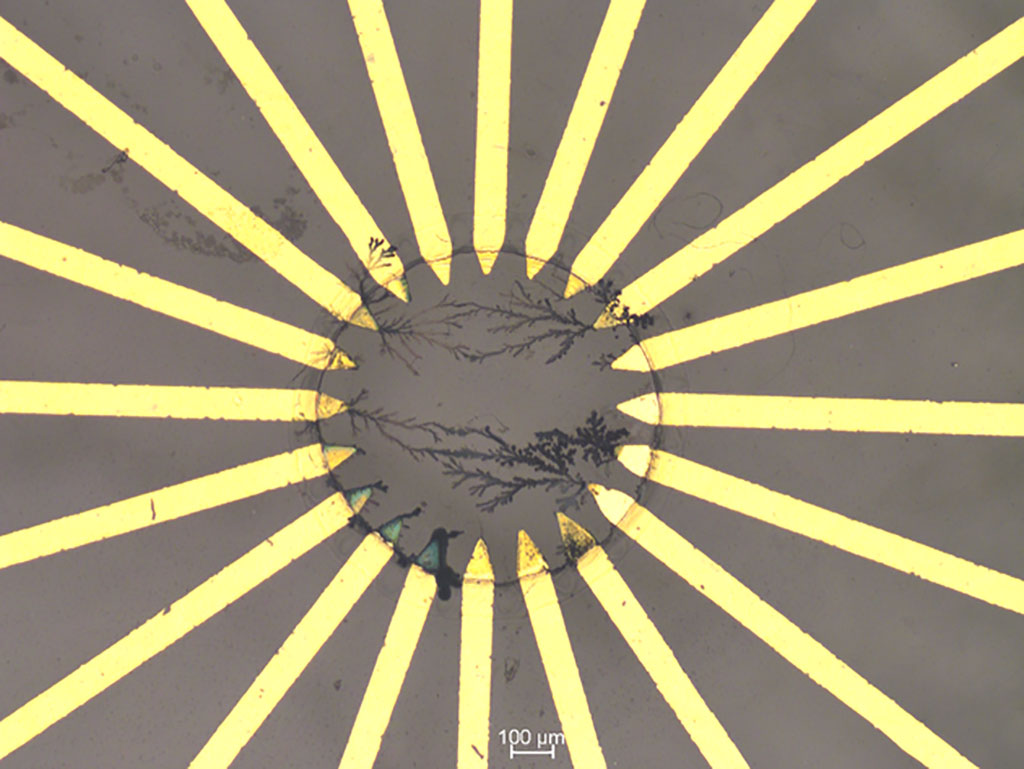 Image: Artificial polymer-based neural network. The strongly nonlinear behavior of these networks enables their use in reservoir computing (Photo courtesy of TU Dresden)
Researchers have developed an implantable Artificial Intelligence (AI) system for the early detection and treatment of illnesses.

For the first time ever, scientists at the Chair of Optoelectronics at TU Dresden (Dresden, Germany) have succeeded in developing a bio-compatible implantable AI platform that classifies in real time healthy and pathological patterns in biological signals such as heartbeats. It detects pathological changes even without medical supervision.

AI will fundamentally change medicine and healthcare: Diagnostic patient data, e.g. from ECG, EEG or X-ray images, can be analyzed with the help of machine learning, so that diseases can be detected at a very early stage based on subtle changes. However, implanting AI within the human body is still a major technical challenge. The TU Dresden scientists have demonstrated an approach for real-time classification of healthy and diseased bio-signals based on a biocompatible AI chip. They used polymer-based fiber networks that structurally resemble the human brain and enable the neuromorphic AI principle of reservoir computing. The random arrangement of polymer fibers forms a so-called "recurrent network," which allows it to process data, analogous to the human brain. The nonlinearity of these networks enables to amplify even the smallest signal changes, which - in the case of the heartbeat, for example - are often difficult for doctors to evaluate. However, the nonlinear transformation using the polymer network makes this possible without any problems.

In trials, the AI was able to differentiate between healthy heartbeats from three common arrhythmias with an 88% accuracy rate. In the process, the polymer network consumed less energy than a pacemaker. The potential applications for implantable AI systems are manifold: For example, they could be used to monitor cardiac arrhythmias or complications after surgery and report them to both doctors and patients via smartphone, allowing for swift medical assistance.

"The vision of combining modern electronics with biology has come a long way in recent years with the development of so-called organic mixed conductors," explained Matteo Cucchi, PhD student and a member of the research team. "So far, however, successes have been limited to simple electronic components such as individual synapses or sensors. Solving complex tasks has not been possible so far. In our research, we have now taken a crucial step toward realizing this vision. By harnessing the power of neuromorphic computing, such as reservoir computing used here, we have succeeded in not only solving complex classification tasks in real time but we will also potentially be able to do this within the human body. This approach will make it possible to develop further intelligent systems in the future that can help save human lives."