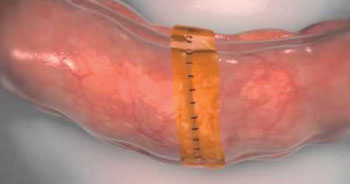 The curing process is initiated by contact of the viscous fluid with the moisture in the tissue. The cured sealant forms a network of large polymeric chains that allows it to remain soft and flexible, while also creating a strong tissue bond. The sealant remains well adhered to the tissue during the first two weeks after surgery, and then proceeds to break down into harmless subcomponents over a period of three months. Burst strength testing of the product shows that it is able to withstand pressures over 150 mmHg, twice that of normal bowel peristalsis. Sylys Surgical Sealant is a product of Cohera Medical (Pittsburg, PA, USA), and has received the European Community CE marking of approval.

“Anastomotic leak is the most devastating complication associated with intestinal resection, contributing to morbidity and mortality,” said James McCormick, DO, program director for general surgery at Forbes Hospital (Monroeville, PA, USA). “We have made tremendous strides in curtailing the risk associated with intestinal anastomosis, but we are always striving for further improvement and greater patient safety.”

Anastomotic leakage rates following colon resection range on average from 3%–15%. Such leakage is considered the most serious complication of bowel repair, doubling the length of stay and increasing mortality rates as much as ten-fold, with at least one third of the post-surgical mortality after colorectal surgery is attributed to leaks. Beyond the initial mortality risk, reoperation rates after leakage can be as high as 87%, and overall five year survival rates are reduced by 20%.