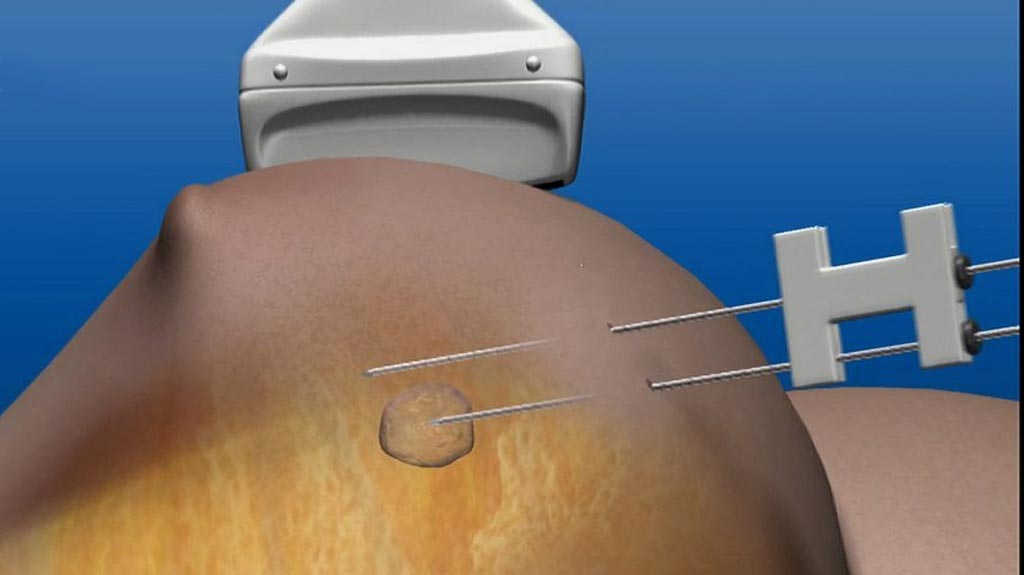 The Novian Health (Chicago, Il, USA) Novilase Laser Therapy System consists of an 805 nanometer wavelength Laser diode source with an output of 1-8 watts, a power distribution unit with user accessible master power switch, an isolation transformer, and a thermal temperature to digital converter, all mounted in lightweight storage cart. To provide the therapy, a disposable sterile probe kit is used, consisting of a hollow stainless steel laser probe with an attached thermistor, a hollow stainless steel thermal probe with five embedded thermistors, and other accessories. The system is controlled via a computer running Windows 7 or better.

During the procedure, ultrasound or x-ray image-guidance is used to insert the two small probes into and alongside the tumor. The laser probe delivers laser energy to provide focal thermal energy, while the thermal probe monitors temperature at the edge of the desired ablation zone. Treatment times can range from 15 to 30 minutes, with the results confirmed by follow-up imaging. Studies have shown that more than 90% of malignant breast tumors are completely destroyed during one Novilase procedure, with patients reporting better health-related quality of life outcomes compared to lumpectomy.

Fibroadenoma is the most widely spread breast benign tumor, with as much as 10% of women at risk of developing it in their lifetime; it also represents more than half of breast biopsies. It affects women of all ages, but is a lot more frequent with women under 30. The pathology is often found during a medical examination or by women doing their own palpation, and radiologic images using mammography and ultrasound are used to confirm the diagnosis. In some cases, a micro biopsy is necessary to confirm its benign nature.