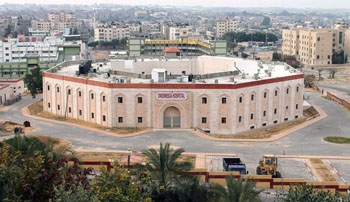 Image: The new Indonesia Hospital in Northern Gaza strip (Photo courtesy of MER-C).
A new hospital funded by the people of Indonesia has been officially opened in the Gaza Strip, after a five-year construction effort.

The hospital is built on 16,000 m2 of land donated by the government of Gaza on a hill near Jabaliya, Gaza’s largest refugee camp. With 100 ward beds, four highly equipped operating theatres (ORs), and a 10-bed intensive care unit (ICU), it is the largest medical facility in northern Gaza, and will offer general and specialist abdominal care, and will also be home to Gaza’s only modern computerized tomography (CT) scanner. It is staffed by Gazans, helped by a few Indonesian volunteers.

Built at a cost of USD 8.7 million funded by Indonesia’s Medical Emergency Rescue Committee (MER-C; Jakarta, Indonesia), the octagonal, three-story Indonesia hospital will replace Kamal Adwan hospital, which has been closed down for renovations and maintenance. The Palestinian ministry of health will now renovate Kamal Adwan Hospital to improve the quality of its services, and during this period, medical services for children will be temporarily available in other hospitals in Gaza, including al-Nasr, al-Durra, Bait Hanoun, and Balsam hospitals.

“I would like to thank the people and the government of Indonesia for all of their help they have given in helping the people of Gaza,” said Dr. Mufeed Mukhalat, Health Minister of Palestine in Gaza.

“This project is the proof of hard work and great collaboration. This is the result of collaboration, helping one another and involving every element available on the Gaza strip,” said Dr. Naji Sarhan, deputy minister of public works of Palestine in Gaza. “Indonesia Hospital as a mandate from the people of Indonesia to the people of Palestine would be one of the biggest hospital on the Gaza strip, even in the whole Palestine. Indonesia Hospital would also be the main hospital in north Gaza.”

The Indonesia Hospital will be joined in late 2016 by the Turkish-Palestinian Friendship Hospital, built at a projected cost of USD 34 million, and a Qatari-funded clinic specializing in fitting prosthetic limbs.