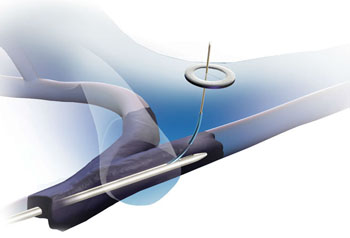 The Bluegrass Vascular (San Antonio, TX, USA) Surfacer System is designed to reliably, efficiently, and repeatedly gain central venous access by first inserting it through the femoral vein, and navigating up through the patient's venous system to an exit point in the right internal jugular (RIJ) vein. The introducer sheath of the CVC is then locked onto the needle wire and pulled into the right atrium, using the Surfacer as its guide. The inside-out approach thus achieves access to an occluded RIJ vein, while preserving secondary central veins.

While permanent vascular access, such as an AV fistula, is the preferred access option for patients on hemodialysis therapy, these often can take four months or longer to mature, and a CVC is often required during this time period; unfortunately, more than 40% of these patients develop a venous obstruction. The Surfacer system can therefore safely provide the time needed for AV fistula maturation, thereby reducing hemodialysis provider cost due to CVC occlusion, and decreasing catheter-associated morbidity and other complications.

“The launch of the Surfacer System in Europe brings a much-needed solution to a growing population of patients requiring vascular access for vital treatments, and who currently have limited options due to obstructed upper body access,” said Gürkan Sengölge, MD, of the Medical University of Vienna (Austria; www.meduniwien.ac.at). “No other device offers such an innovative inside-out method for restoring access and preserving options in patients with chronically occluded veins.”

“Multiple central venous occlusions can cause significant long-term morbidity,” said John Gurley, MD, an interventional cardiologist at the University of Kentucky Medical Center (Lexington, USA), and founder of Bluegrass Vascular. “The novel inside-out approach is an innovative and simple method that restores and preserves right-sided venous access, despite chronic occlusion, and retains the viability of other existing central veins.”

An AV fistula is currently the most recommended access for kidney disease patients who must undergo dialysis, created by connecting a patient's vein and artery to form a long-lasting treatment site through which blood can be removed and returned. Many patients, however, prefer a catheter instead, for reasons that include inadequate preparation for dialysis, avoidance of surgery, or fear of needles (since the connection to the dialysis machine via a catheter does not require needles).