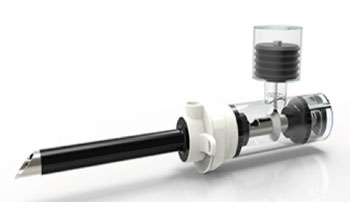 Developed by researchers at Nottingham Trent University (NTU; United Kingdom) and Olberon Medical Innovations (Loos, France), the modified trocar is based on a mechanism which monitors changes in the pressure of the insertion, and inflates a diaphragm which activates its own withdrawal by the force of a tiny spring, after it passes through the muscle and tissue.

“It’s imperative that the trocar is improved to help avoid the kinds of accidents which can cause serious and fatal injuries, no matter how rare,” said Prof. Amin Al-Habaibeh, PhD, of the NTU school of architecture, design, and the built environment, who developed the trocar together with research assistant Joaquim Justino Netto, a student from Brazil on placement as part of the Science Without Borders scholarship. “This simple invention could be an important tool which prevents accidents and enables surgeons to carry out this routine procedure with increased confidence at a lower risk of injury to the patient.”

“This advanced trocar is a significant improvement on existing products and highlights the importance of industry working with academia,” said Arash Bakhtyari, MD, managing director of Olberon Medical Innovations. “Through the longstanding and successful collaboration with Nottingham Trent University, we have developed a novel medical invention which has the potential to help doctors and patients around the world.”

Although complications are rare, bowel perforations or bile duct injuries which remain undiagnosed until after surgery can result in life threatening complications such as circulatory collapse or septic shock. Data from the UK National Patient Safety Agency (London, United Kingdom) shows that between 2003 and 2010, there were 48 serious incidents relating to laparoscopic surgery, including 11 deaths.