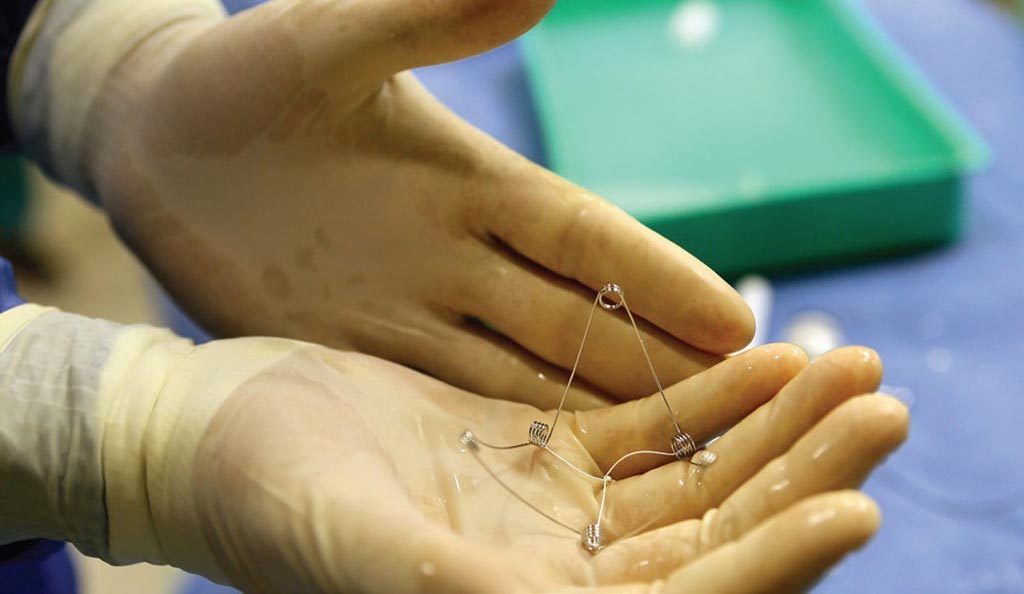 Image: The CORolla device is inserted into a patient\'s heart to treat congestive HF (Photo courtesy of Piotr Flitr/ RHCC).
A new implantable device can improve cardiac diastolic function by expanding the ventricle wall, helping the heart fill with blood.

The CorAssist Cardiovascular (Haifa, Israel) CORolla device is an elastic implant placed inside the left ventricle in a minimally invasive procedure. The devices operate by harnessing energy during systole (contraction) and releasing it to the left ventricle during diastole (relaxation). The direct internal expansion forces are distributed on the left ventricle wall and septum, thus enhancing the elastic characteristics of the left ventricular wall. CORolla is implanted through a trans apical approach (TAA) or percutaneous approach (PA) in an off-pump procedure.

The CORolla device, which is composed of a series of elastic elements interposed between spiral screws, was developed specifically to treat heart failure with preserved ejection fraction (HFpEF), characterized by diastolic and systolic functional abnormalities that result in exercise intolerance. HFpEF is a complex disease, encompassing a diverse cohort of patients and marked by the presence of multiple etiological mechanisms, but diastolic dysfunction is considered a crucial component of the disease, which affects approximately 50% of patients with chronic heart failure (HF).

“In diastolic heart failure, the heart contracts well, but cannot open enough so that blood can fill. There is no drug or medication for diastolic heart failure,” said Professor Gil Bolotin, MD, of Rambam Health Care Campus (RHCC; Haifa, Israel), who led the first clinical implantation surgery of the device in Robert MacLachlan, a 72-year old Canadian. “In a small operation, through the apex of the heart, we introduce this spring (it’s just a spring), that helps the heart to open and lets the blood go in better than beforehand.”

The Israel Ministry of Health (Jerusalem) has authorized 10 clinical trials at RHCC to test the efficacy of the CORolla implant.