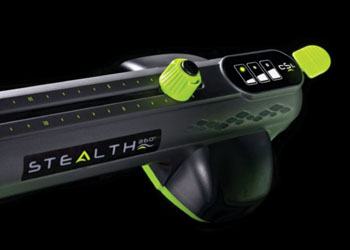 The Stealth 360° Orbital Atherectomy System (OAS) system is intended to treat calcified and fibrotic plaque in arterial vessels by endarterectomy. The system is based on an orbital mechanism of action that protects healthy tissue, while removing even the most difficult to treat plaque. The electrical-powered handle features a power button and speed selection controls positioned for ease of use and greater physician control. The crown, available in sizes of 1.25, 1.50, 1.75, and 2.00 mm, is designed for maximal plaque removal at lower speeds, with a flexible shaft for compromised run-off, vessel bends, or tortuous anatomy.

The orbital system operates by centrifugal force, which causes the crown to rotate at the same time as it advances through the lesion. As crown rotation increases, centrifugal force presses the crown against the plaque and sands it into tiny particles. More than 99% of the particles are smaller than a red blood cell, and they are washed away with the patient’s blood flow. The elastic, more compliant tissue flexes away from the crown and leaves the non-diseased tissue intact. The result is a smooth, concentric and open vessel that appears to be a normal size and allows robust blood flow.

Additionally, by first removing the hardened plaque and changing the compliance of the lesion by atherectomy, clinicians can subsequently perform low-pressure balloon angioplasty, which may reduce the potential for barotrauma to the vessel during the angioplasty procedure. The Stealth 360° Orbital Atherectomy System (OAS) system is a product of Cardiovascular Systems (CSI; St. Paul, MN, USA), and has received the European Community (CE) marking of approval.

“Securing CE mark for Stealth 360° greatly expands our market opportunity and is an important milestone toward benefiting patients in Europe suffering from PAD, especially those with CLI, who have been underserved by other treatment options,” said David Martin, president and CEO of CSI. “A determining factor for CLI is calcium buildup in leg arteries, particularly small vessels below the knee. Our technology, with its unique mechanism of action, has demonstrated it can safely and effectively treat this complex disease, with lasting results.”

PAD is a narrowing of the peripheral arteries due to atherosclerosis, and is most common in the pelvis and legs. The most common symptoms of PAD are cramping, pain, or tiredness in the leg or hip muscles while walking or climbing stairs, which is temporarily relieved by rest. PAD sufferers have four to five times more risk of heart attack or stroke, and if left untreated, it can lead to gangrene and amputation.