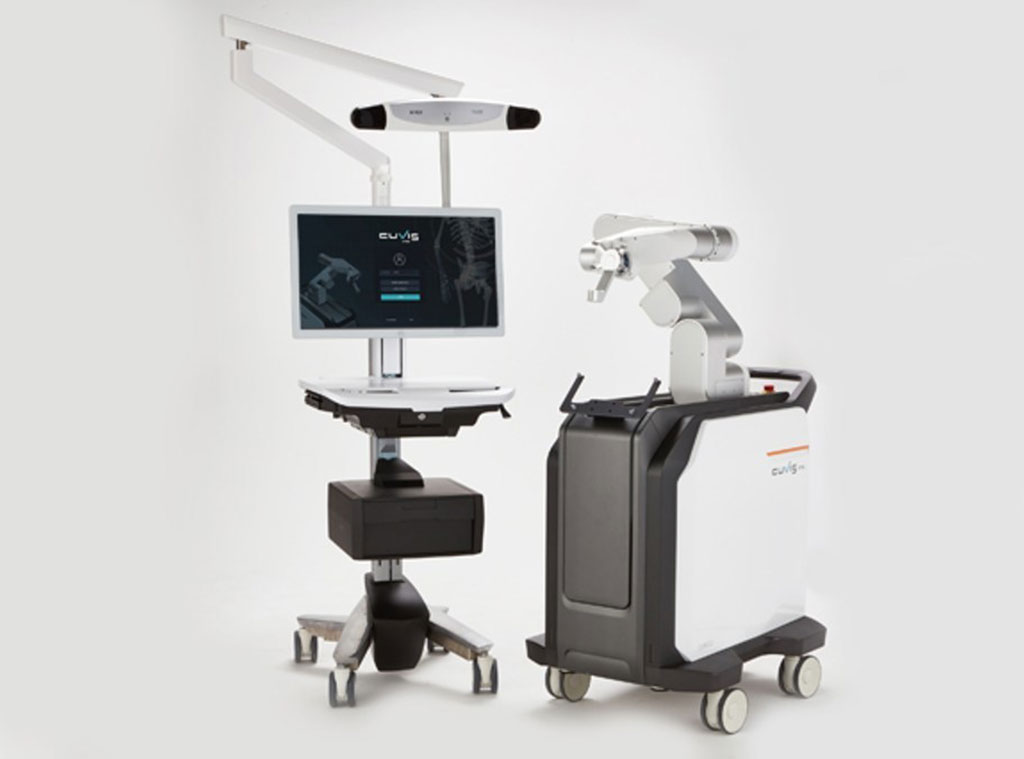 The Curexo (Seoul, South Korea) CUVIS-Spine is a next-gen spinal surgery robot that guides the insertion of a pedicle screw according to the surgery plan. The system includes uses a high precision robot arm and wireless, one-step navigation based on a real-time GPS-like sensor that provide precise, safe, and faster surgery, when compared to traditional manual placement. It also minimizes X-ray radiation exposure of both patients and medical staff, as only two slices (AP and LL) are needed for plan the pedicle screws entry point, target point, and route.

Both two-dimensional X-ray filming (via a C-arm) and three -dimensional filming (with an O-arm) are available, expanding clinician’s options. The wireless one-step navigation and robot arms allow multiple steps, such as needling, K-wire manipulation, dilation, and tapping) to be performed using just one tool, reducing surgery duration greatly. In order to prevents surgical instruments from skiving, an optical tracking system (OTS) provides accurate data on the lateral force affecting the arm and pedicle screw in real-time.

“The spinal surgery robot 'CUVIS-spine' that we have developed and manufactured with our technology has acquired FDA (US)'s licensing. This is the 3rd license that we have acquired, followed by Korea and Europe, and now we can sell our solution in all countries including the US which is the biggest medical market." He also said that "CUREXO plans to focus on our medical robots sales, including 'CUVIS-joint', 'CUVIS-spine' and 'Morning Walk' to not only the Korean market but also to advanced medical markets such as the US and Europe."

“CUVIS-Spine had successfully carried out the insertion of pedicle screws on a patient with spinal stenosis and degenerative spondylolisthesis,” said Jae-Joon Lee, CEO of Curexo, following the first successful spinal robotic surgery at Severance Hospital (Sinchon, South Korea). “After the surgery, image examinations had proven the fixation of the screws as originally planned, and the patient was able to leave the hospital on the fifth day with improvements.”

“I expect that Korean robots will be able to enter the market by accumulating track records and creating clinical evidence in the field of spinal surgical robots, which is expanding globally," said Seong Yi, MD, of the department of neurosurgery at Severance Hospital, who participated in the development of CUVIS-Spine. “Clinical data of spinal surgical robots, including safety, validity, and radiation safety level will contribute to the development and globalization of the domestic surgical robot industry.”

Pedicle screws provide a means of gripping a spinal segment. The screws themselves do not fixate the spinal segment, but act as firm anchor points that can then be connected with a rod. The screws are placed at two or three consecutive spine segments and then a short rod is used to connect the screws; this construct prevents motion at the segments that are being fused. After the bone graft grows, the screws and rods are no longer needed for stability and may be safely removed. However, most surgeons do not recommend removal unless the pedicle screws cause discomfort for the patient.