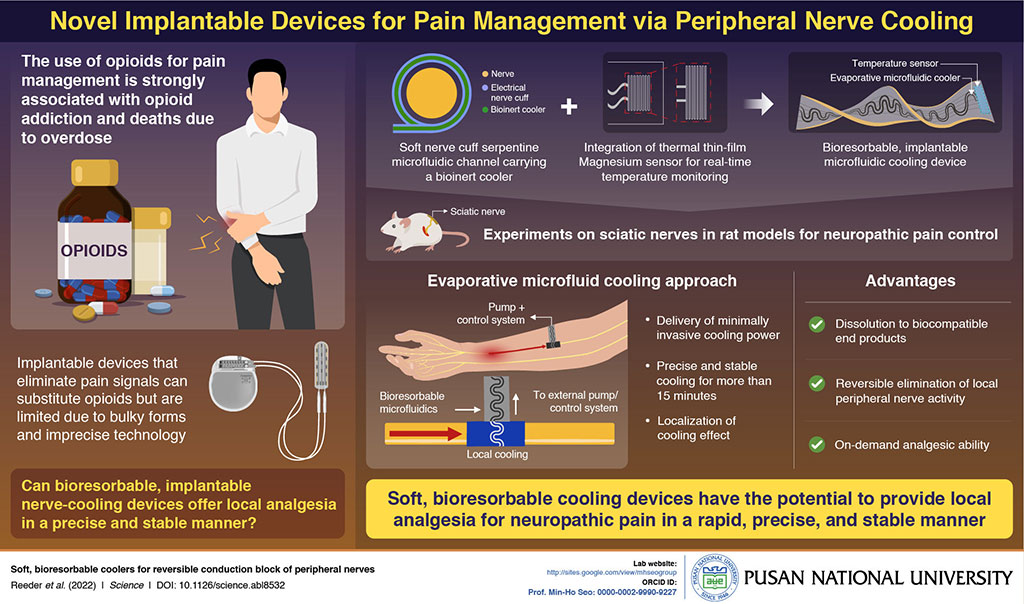 Researchers have developed a soft, bioresorbable, implantable device with the potential to cool peripheral nerves in a minimally invasive, focused manner that could be used to treat pain after surgery.

To develop the device, a team of researchers from Pusan National University (Busan, South Korea) designed a microfluidics system formed with a bioresorbable material - poly(octanediol citrate) - with interconnects carrying a liquid coolant to a serpentine chamber. To top it off, a Magnesium temperature sensor for real-time temperature monitoring was incorporated at its distal end. The intensity and localization of the cooling effect was regulated by perfluoro pentane (PFP) and dry nitrogen gas (N2) - the two components of the liquid coolant, as well as the geometry of the serpentine chamber.

Next, the team tested the device by implanting it into the sciatic nerves of living rat models with neuropathic pain associated with spared nerve injury. After a three-week evaluation, the team found that the device successfully delivered cooling power to the peripheral nerves of the rats, which led to a reduction in their pain. Fortunately, the delivery of the cooling power occurred in a minimally invasive, stable, and precise manner. Moreover, this application was localized and reversible, and remained effective for almost 15 minutes during one session. On being submerged in phosphate-buffered saline solution at 75°C, the device, which was made of bioresorbable materials, dissolved within 20 days and was eliminated in approximately 50 days. These findings imply that it has the potential to naturally degrade and get resorbed in the human body.

“The developed device can be used to treat pain after surgery,” said Professor Min-Ho Seo from Pusan National University who led the team of researchers and believes the device could have important future applications. “Since it is connected to an external source of fluid and power like a commercial intravenous (IV) device, it can easily be controlled by the patient. This way, our implantable device will be able to provide targeted and individualized relief without the drawbacks of the addictive pain medications.”