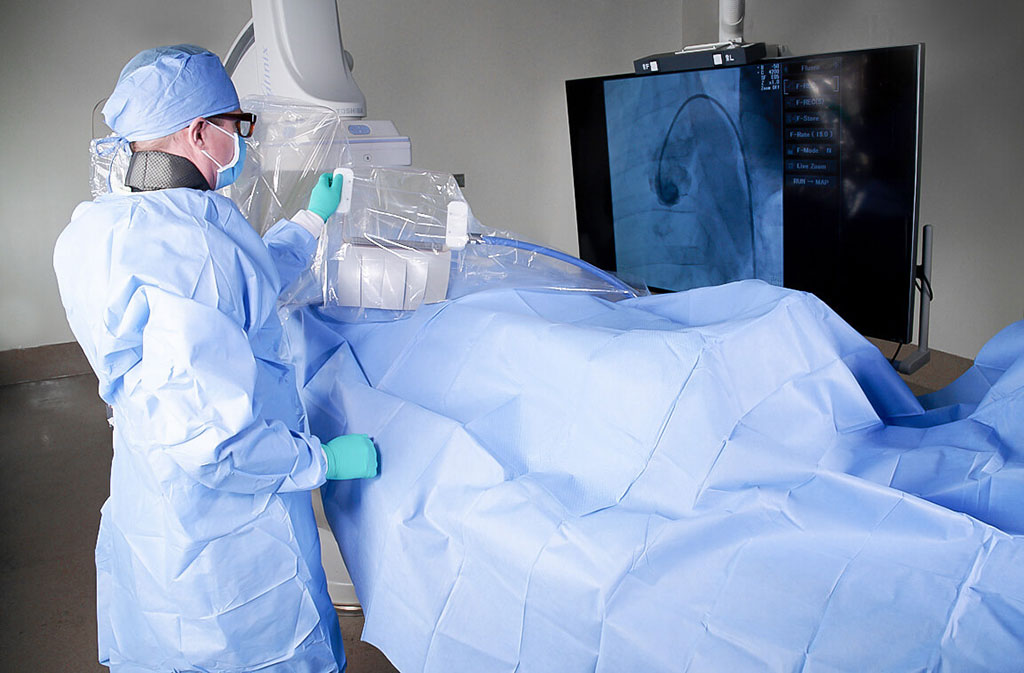 Image: The EggNest XR is a comprehensive, scatter radiation protection system fully integrated into the workflow of the modern Cath Lab (Photo courtesy of Egg Medical)

Scatter radiation is a form of secondary radiation created when the primary X-ray beam used to image the patient's anatomy during interventional fluoroscopy procedures is reflected off the patient's body in the procedure room. Physicians and staff who work in these environments are exposed to scatter radiation during medical procedures (such as angioplasty, stenting, and transcatheter valve treatment), putting them at increased risk for long-term health effects. Mounting published data show a link between this occupational radiation exposure and cancer, cataracts, hypertension, and neuro-degenerative issues, despite the use of standard X-ray shielding. Now, a comprehensive, scatter radiation protection system protects the entire interventional team in hospital X-ray labs (cardiac catheterization, electrophysiology, interventional radiology, and operating rooms) from the harm of long-term exposure to scatter radiation.

The EggNest XR from Egg Medical, Inc. (Arden Hills, MN; USA) is a comprehensive, scatter radiation protection system fully integrated into the workflow of the modern Cath Lab. The system is built on a novel carbon fiber platform with integrated radiation shielding that replaces the patient mattress on the X-ray table. It protects the entire medical team regardless of location, dramatically reducing scatter radiation exposure.

The EggNest system moves with patient and swings with X-ray, providing passive protection with an integrated antimicrobial and impermeable surface for ease of use. With a carbon fiber base platform and modular shielding components, it is designed for optimal imaging and C-arm motion. Testing performed by the company and confirmed by independent hospital studies has shown that the EggNest system reduces room scatter radiation by 91% vs. standard shielding. Egg Medical has achieved CE Mark for the EggNest XR radiation protection system and plans to continue expansion into all markets recognizing the CE Mark.

"Occupational exposure of hospital staff to X-rays during medical procedures is an important workplace risk. Almost everyone in the interventional cardiology and radiology profession knows someone with a radiation related illness. There have been minimal improvements in X-ray shielding over the past 30 years, leaving the medical teams working in these environments exposed to scatter radiation every day," said Robert F. Wilson MD, Egg Medical CEO. "The EggNest platform addresses the problem of hospital personnel radiation exposure for everyone working in these environments by reducing scatter radiation by an average of 91%."