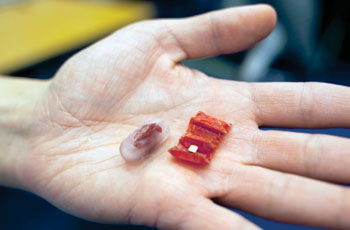 Image: The ingestible capsule and the unfolded origami robot (Photo courtesy of Melanie Gonick / MIT).
A new study describes how a tiny origami robot steered by external magnetic fields crawled across the stomach wall to remove a swallowed button battery.

Developed by researchers at the Massachusetts Institute of Technology (MIT, Cambridge, MA, USA), the University of Sheffield (United Kingdom), and the Tokyo Institute of Technology (Japan), origami is a functional three-dimensional (3D) robot than can be actuated on-demand for untethered walking and swimming. The rectangular robot has accordion folds perpendicular to its long axis, and pinched corners that act as points of traction.

Structurally, it consists of a heat-sensitive layer sandwiched between two structural layers that form a sheet 1.7 cm3 in size. A pattern of slits in the outer layers determines how the robot will unfold when the middle layer is thermally activated. At the center of one the forward accordion folds is a permanent cubic neodymium magnet that responds to changing magnetic fields outside the body. The forces that control the robot’s motion are principally rotational; a quick rotation will make it spin in place, but a slower rotation will cause it to pivot around one of its fixed feet.

Since the robot has asymmetric body balance along the sagittal axis, it can walk at a speed of 3.8 body-lengths per second while under control of the alternating external magnetic field. The origami robot propels itself using a “stick-slip” motion, in which its appendages stick to a surface through friction when it executes a move, but slip free again when its body flexes to change its weight distribution. The robot is made of a biocompatible, acetone-degradable material that allows the entire robot’s body to vanish in a liquid.

In experiments involving a simulation of the human esophagus and stomach, the robot unfolded itself from an ingestible capsule, and steered by external magnetic fields, crawled across the simulated stomach wall to remove a swallowed button using its cubic neodymium magnet. It then degraded. The origami robot was presented at the International Conference on Robotics and Automation, held during May 2016 in Stockholm (Sweden).

“It’s really exciting to see our small origami robots doing something with potential important applications to health care,” said study presenter Professor Daniela Rus, PhD, director of the MIT Computer Science and Artificial Intelligence Laboratory (CSAIL). “For applications inside the body, we need a small, controllable, untethered robot system. It’s really difficult to control and place a robot inside the body if the robot is attached to a tether.”