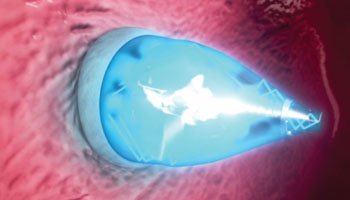 Developed by researchers at Boston Children’s Hospital (BCH; MA, USA), the Wyss Institute for Biologically Inspired Engineering (Boston, MA, USA), and Brigham and Women's Hospital (Boston, MA, USA), the catheter-based technology has no implantable rigid components, functioning instead by unfolding and attaching an adhesive-loaded elastic patch via catheter. Over time, normal tissue growth resumes and heart tissue grows over the patch; the patch itself dissolves when it is no longer needed.

The catheter is first inserted percutaneously and directed to the ASD. Once in place, the clinician deploying a double-balloon, one around the front end of the catheter, passed through the ASD, and another at the rear. After inflation, the clinician turns on a fiber-optic UV light which is reflected off the balloons metallic coating to activate the patch’s adhesive coating. As the glue cures, pressure from the positioning balloons on either side of the patch help secure it in place. Both balloons are then deflated and the catheter is withdrawn.

The researchers demonstrated closure on the distal side of a defect in porcine abdominal wall, stomach, and heart tissue ex vivo. The catheter was further evaluated in rat heart and abdomen. According to the researchers, patches attached to the heart and abdominal wall with the device showed similar inflammatory response as sutures, with 100% small animal survival. In the porcine model, a ventricular septal defect in a beating heart was reduced to less than 1.6 mm. The study describing the system was published on September 23, 2015, in Science Translational Medicine.


“In addition to avoiding open heart surgery, this method avoids suturing into the heart tissue, because we’re just gluing something to it,” said contributing author Pedro del Nido, MD, chief of cardiac surgery at BCH. “The device represents a radical change in the way these kinds of cardiac defects are repaired; we don’t have to stop the heart. This will enable a wide range of cardiac procedures in the future.”

An ASD is a congenital defect resulting from an abnormal formation of the septum that divides the upper chamber into a left and right atrium. This results in blood flow between the two upper heart chambers through the ASD, forming a shunt. As a result, pressure in the lungs may build up, causing less oxygen in the blood. Symptoms can include difficulty breathing, frequent respiratory infections in children, palpitation, and shortness of breath with activity.