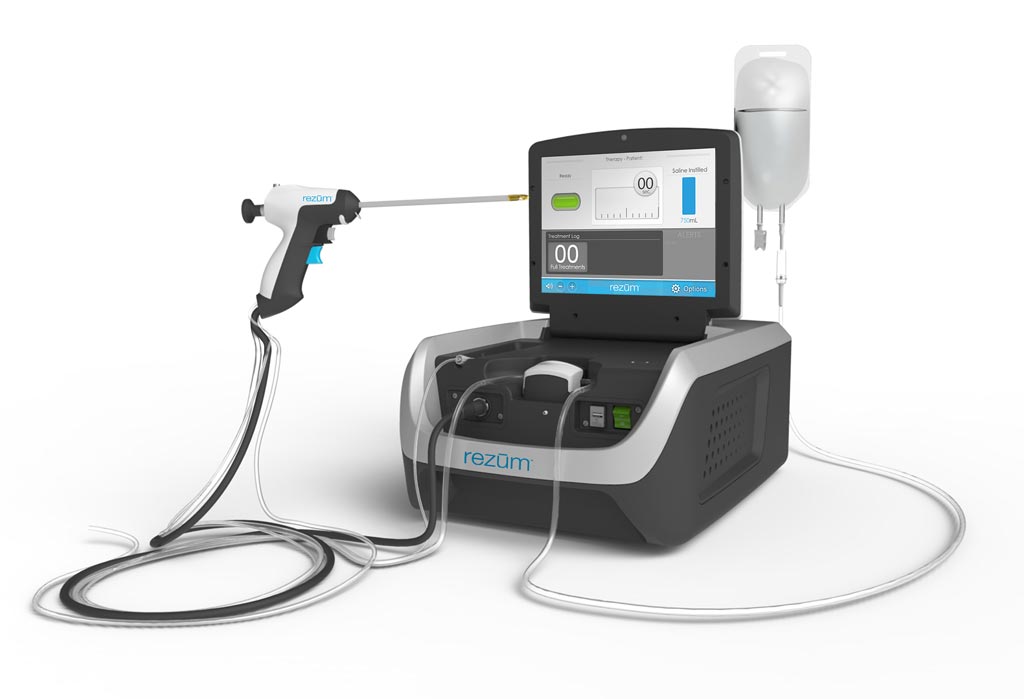 The NxThera (Maple Grove, MN, USA) Rezūm System is based on convective water vapor energy (WAVE) platform technology, which is designed to treat BPH symptoms such as frequency, urgency, irregular flow, weak stream, and straining by delivering steam into targeted prostate tissue. When the water vapor contacts the tissue it condenses, releasing the stored thermal energy, causing the obstructive prostate tissue cells to die. In the weeks following a Rezūm procedure, the body's natural healing response eliminates the treated tissue, shrinking the prostate.

The transurethral thermal therapy can be performed in a clinic or out-patient setting using the simple hand-held device, which delivers radiofrequency (RF) generated thermal therapy, in the form of water vapor, directly to the enlarged, obstructive prostate tissue. As the extra tissue is removed, the urethra opens back up, reducing BPH symptoms and improving the patient's quality of life. The system also allows men to retain sexual function, unlike surgical BPH treatments, which typically have higher incidences of long-term sexual side effects.

“Studies have documented that 60% of men discontinue use of drug therapy to treat BPH after one year as a result of side effects, including sexual dysfunction, and lower degrees of symptom relief and quality of life,” said Bob Paulson, president and CEO of NxThera. “Rezūm offers a cost-effective BPH treatment option, providing durable and compelling symptom relief, without sexual dysfunction, which allow men to resume their quality of life, balanced with an efficient use of health care spending.”

More than half of all men in their sixties and as many as 90% of men in their seventies and eighties have some symptoms of BPH such as more frequent urination with hesitant, interrupted, or weak stream and urgency and leaking. Severe BPH can lead to more serious problems over time, such as strain on the bladder, urinary tract infections, bladder or kidney damage, bladder stones, and incontinence. Current treatment options to relieve symptoms associated with BPH include drug therapy or surgical procedures, including removal of the enlarged part of the prostate.