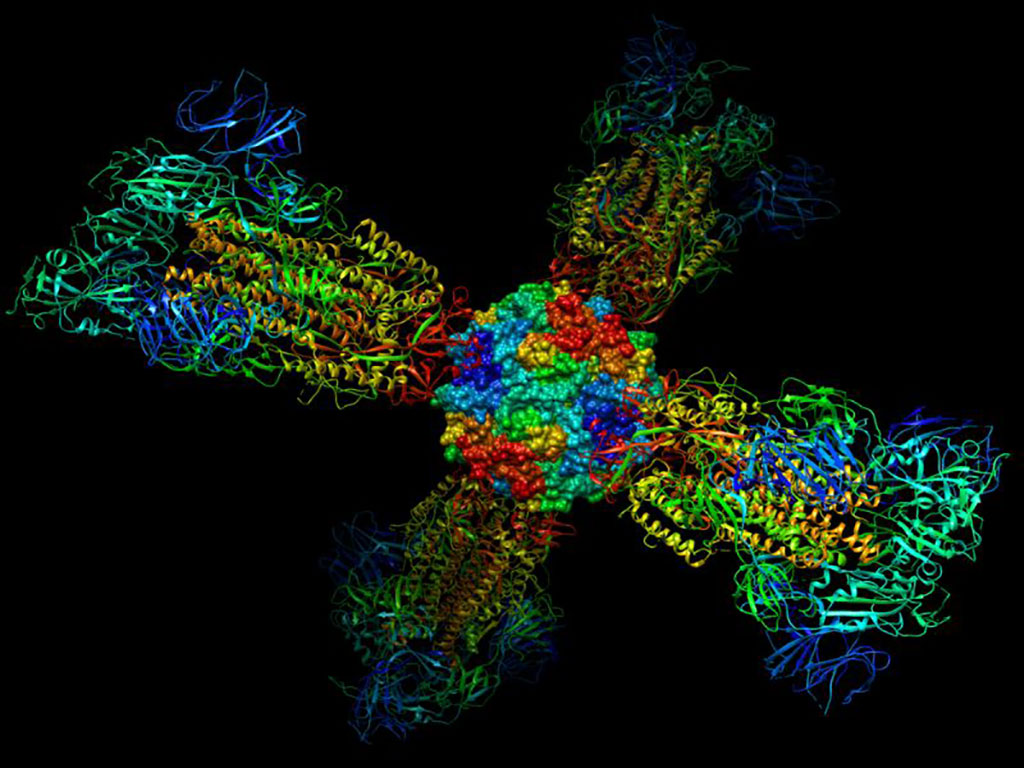 Image: An atomic model of one of the NSP Covid-19 Nanoparticle vaccine candidates displaying the SARS CoV-2 spike protein (Photo courtesy of Predictive Oncology)
A ground-breaking novel nanoparticle vaccine technology based on a self-assembling nanoparticle could prove to be a game changer for the development of a COVID-19 vaccine.

The novel nanoparticle vaccine technology platform recently developed by Dr. Daniel Carter is based on a self-assembling nanoparticle called NSP10 which has special surface properties that allow for the rapid design and display of viral receptor stems for virtually any virus, making it extremely versatile. The novel nanoparticle vaccine technology platform has been licensed to Predictive Oncology (Minneapolis, MN, USA), which has entered the race to develop a COVID19 vaccine.

Previous vaccine studies of NSP10-based Nanoparticles in rabbits produced exceptionally high titers against a herpes viral protein called glycoprotein D, normally non-highly antigenic (Titer refers to the number of times the blood serum can be diluted and still react with the virus antigen). Titers in this case ranged from 1:1,000 with a simple injection of 500 micrograms of plasmid DNA, to as much as 1:25,000 after a second booster (third injection) - all without the use of adjuvants or transfection agents. This is unprecedented and revolutionary for a DNA vaccine. The exact reasons why the NSP10-based Nanoparticles exhibit these properties is still a subject of study, but scientists know that nanoparticles are processed differently by the immune system and smaller nanoparticles can often produce higher titers – NSP is one of the smallest currently evaluated.

The level of titer is important for many reasons, for example, earlier animal experiments with vaccines focused on severe acute respiratory syndrome (SARS) and Middle East respiratory syndrome (MERS) found that low antibody levels could potentially lead to dysfunctional immune responses, increasing infection and damaging the lungs. In addition to enhanced protective immunity, stronger titers mean that it takes less vaccine per dose which has added advantages in safety and production scale. In the case of NSP10-based vaccines, as it translates to humans, this could mean that a single gram of plasmid DNA can potentially immunize as many as 2,000 people, perhaps more.

According to Dr. Carter, “this suggests that if we see similar titers in humans, no atypical resources or capabilities are required to manufacture the vaccine at a sufficient scale to impact the pandemic.” For example, a single bacterial fermentation at commercial scale can in a span of two to three days, produce enough raw material to eventually immunize millions of people - “merge this with the well-established processes for purifying injectable-grade plasmid DNA (which can also be done in short order) and you have the potential for a disruptive game changing technology,” added Dr. Carter.