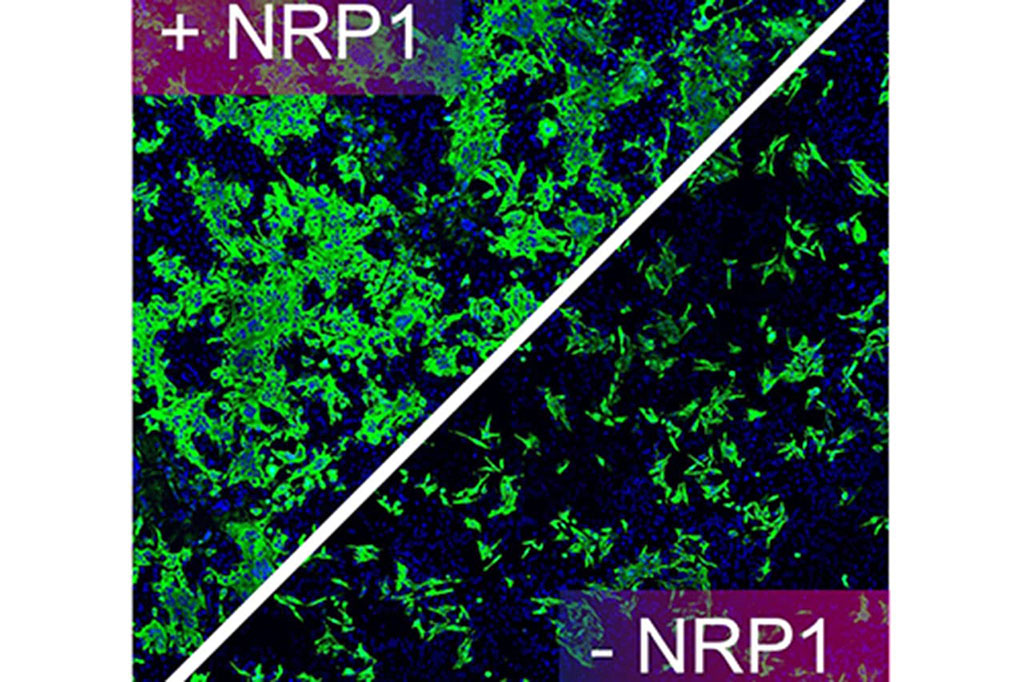 Image: The image shows human cells infected with SARS-CoV-2 and expressing viral proteins (shown in green). (Photo courtesy of University of Bristol)
In a major breakthrough an international team of scientists has potentially identified what makes SARS-CoV-2 highly infectious and able to spread rapidly in human cells.

In their published findings, researchers at the University of Bristol (Bristol, UK) have described how the virus’s ability to infect human cells can be reduced by inhibitors that block a newly discovered interaction between virus and host, demonstrating a potential anti-viral treatment.
Unlike other coronavirus, which cause common colds and mild respiratory symptoms, SARS-CoV-2, the causative agent of COVID-19, is highly infective and transmissive. Until now, major questions have remained unanswered as to why SARS-CoV-2 readily infects organs outside of the respiratory system, such as the brain and heart. To infect humans, SARS-CoV-2 must first attach to the surface of human cells that line the respiratory or intestinal tracts. Once attached, the virus invades the cell then replicates multiple copies of itself. The replicated viruses are then released leading to the transmission of SARS-CoV-2. The virus's process of attachment to and invasion of human cells is performed by a viral protein, called the ‘spike’ protein. Understanding the process by which the ‘spike’ protein recognizes human cells is central to the development of antiviral therapies and vaccines to treat COVID-19.

In the breakthrough study, the researchers used multiple approaches to discover that SARS-CoV-2 recognizes a protein called neuropilin-1 on the surface of human cells to facilitate viral infection. "In looking at the sequence of the SARS-CoV-2 Spike protein we were struck by the presence of a small sequence of amino acids that appeared to mimic a protein sequence found in human proteins which interact with neuropilin-1. This led us to propose a simple hypothesis: could the Spike protein of SARS-CoV-2 associate with neuropilin-1 to aid viral infection of human cells? Excitingly, in applying a range of structural and biochemical approaches we have been able to establish that the Spike protein of SARS-CoV-2 does indeed bind to neuropilin-1,” wrote the researchers.

"Once we had established that the Spike protein bound to neuropilin-1 we were able to show that the interaction serves to enhance SARS-CoV-2 invasion of human cells grown in cell culture. Importantly, by using monoclonal antibodies - lab-created proteins that resemble naturally occurring antibodies - or a selective drug that blocks the interaction we have been able to reduce SARS-CoV-2’s ability to infect human cells. This serves to highlight the potential therapeutic value of our discovery in the fight against COVID-19."

“To defeat COVID-19 we will be relying on an effective vaccine and an arsenal of anti-viral therapeutics. Our discovery of the binding of the SARS-CoV-2 Spike to neuropilin-1 and its importance for viral infectivity provides a previously unrecognized avenue for anti-viral therapies to curb the current COVID-19 pandemic,” the researchers concluded.