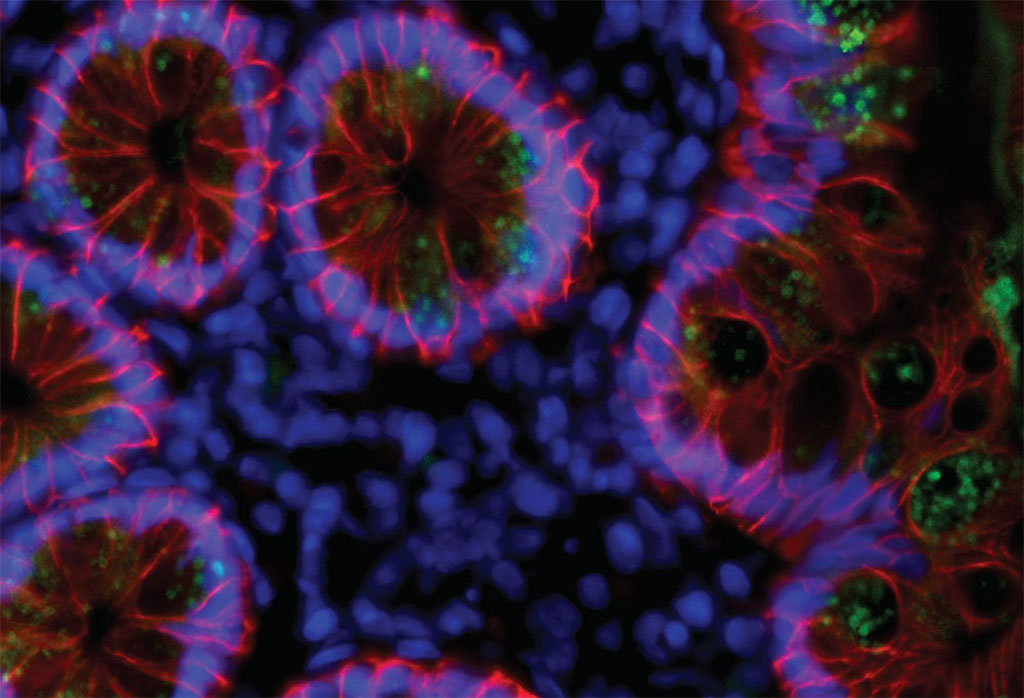 Image: Traces of SARS-CoV-2 (green) in the cells lining people’s intestines three months after infection (Photo courtesy of C. Gaebler et al./bioRxiv.org 2020)
A new study suggests that those who recover from COVID-19 are protected against SARS-CoV-2 for at least six months and likely much longer due to continually improving antibodies produced by immune cells as a result of continued exposure to the remnants of the virus hidden in the gut tissue.

The findings of the study by researchers at The Rockefeller University (New York, NY, USA) provide the strongest evidence yet that the immune system “remembers” the virus and, remarkably, continues to improve the quality of antibodies even after the infection has waned. Antibodies produced months after the infection showed increased ability to block SARS-CoV-2, as well as its mutated versions such as the South African variant. The researchers found that these improved antibodies are produced by immune cells that have kept evolving, apparently due to a continued exposure to the remnants of the virus hidden in the gut tissue. Based on these findings, the researchers suspect that when the recovered patient next encounters the virus, the response would be both faster and more effective, preventing re-infection.

For their study, the researchers examined the antibody responses of 87 individuals at two timepoints: one month after infection, and then again six months later. As expected, they found that although antibodies were still detectable by the six-month point, their numbers had markedly decreased. Lab experiments showed that the ability of the participants’ plasma samples to neutralize the virus was reduced by five-fold. In contrast, the patients’ memory B cells, specifically those that produce antibodies against SARS-CoV-2, did not decline in number, and even slightly increased in some cases.

A closer look at the memory B cells revealed something surprising: these cells had gone through numerous rounds of mutation even after the infection resolved, and as a result the antibodies they produced were much more effective than the originals. Subsequent lab experiments showed this new set of antibodies were better able to latch on tightly to the virus and could recognize even mutated versions of it. SARS-CoV-2 replicates in certain cells in the lungs, upper throat, and small intestine, and residual viral particles hiding within these tissues could be driving the evolution of memory cells.

To look into this hypothesis, the researchers examined biopsies of intestinal tissue from people who had recovered from COVID-19 on average three months earlier. In seven of the 14 individuals studied, tests showed the presence of SARS-CoV-2’s genetic material and its proteins in the cells that line the intestines. The researchers don’t know whether these viral left-overs are still infectious or are simply the remains of dead viruses. The team plans to study more people to better understand what role the viral stowaways may play in both the progression of the disease and in immunity.

“This is really exciting news. The type of immune response we see here could potentially provide protection for quite some time, by enabling the body to mount a rapid and effective response to the virus upon re-exposure,” said Michel C. Nussenzweig, the Zanvil A. Cohn and Ralph M. Steinman Professor and head of the Laboratory of Molecular Immunology.