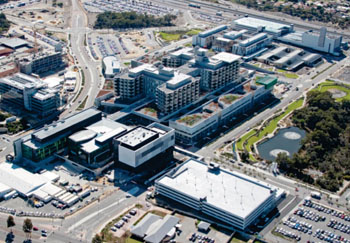 Fiona Stanley Hospital (FSH; Murdoch, Australia) is located in Murdoch, 15 kilometers south of the Perth central business district (CBD), and nine kilometers east of Fremantle. The 783-bed hospital, built at a cost of AUD two billion, will include the 140-bed state rehabilitation service, a 30-bed purpose-built mental health unit, and the state burns service. FSH will be the major tertiary hospital in the south metropolitan area of Perth, and will meet the growing needs of communities south of Perth and across the State.

The FSH was designed to have a healing and therapeutic effect on patients, with 83% of patient rooms being single occupancy, offering increased comfort and privacy. The hospital is spread over five buildings with a total of 150,000 m2 of floor space, with state-of-the-art technology built into every level of the hospital. In addition, more than five hectares of natural bush land, landscaped parks, internal gardens, courtyards, and plazas surround the FSH. Easy access to public transport and major roads facilitate transportation, as do the 3,600 parking bays.

“Fiona Stanley Hospital is a revolutionary facility that provides patient comfort and care innovation, architectural design and health service delivery never before seen in Western Australia,” said WA premier Colin Barnett. “After years of planning by successive governments, this state government began building the hospital here in Murdoch in September 2009 and I am delighted to now see it open.”

Patient admission at the hospital is expected to take place in four phases to allow testing of all systems. Phase one includes the 140-bed state rehabilitation service and associated support services such as pathology, pharmacy, imaging and a range of nonclinical services in the main hospital. In November 2014, Phase II will see clinical services start within the main hospital and will involve the introduction of selected general surgical, orthopedic, anesthetic and obstetric services. During Phase III, the emergency department (ED) is expected to open (in February 2015) and is expected to deal with more than 90,000 people in its first year.

FSH is named after eminent Western Australian doctor and Australian of the Year, Prof. Fiona Juliet Stanley, (born August 1, 1946), an epidemiologist noted for her public health work and her research into child and maternal health and birth disorders such as cerebral palsy.