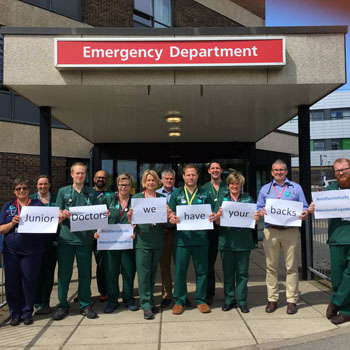 Image: Senior doctors in support of their junior colleagues (Photo courtesy of Dr. Sophie Gough).
The all-out strikes, a precedent in the nearly 70-year history of the National Health Service (NHS, London), are part of the escalating running dispute with the government over a new contract for junior doctors.

The strikes are the fifth and sixth by junior doctors in England since the dispute began in 2015, but during the four previous ones only non-urgent services were affected. This time, 55,000 junior doctors--a term that includes recent medical school graduates, as well as doctors who have been working for over a decade--walked out from all services, including accident and emergency, maternity, and intensive care. NHS services in Scotland, Wales, and Northern Ireland, which are managed separately from England, were not affected by the strike.

According to NHS England, “military level” planning had gone into making sure that patients in need of urgent care would be properly treated, with more consultants on hand to provide essential services. In addition, about 13,000 elective operations and 113,000 outpatient appointments were canceled to free up consultants to provide urgent care during the first strike, which was followed several days later by another.

“It is a good deal and even if you don’t agree with that deal, the question is whether it is appropriate or proportionate to take this action today for the first time in the NHS that the doctors who we depend on will not be providing emergency cover,” said UK health secretary Jeremy Hunt. “We are doing everything we can to make sure it’s provided by other doctors — senior doctors — but of course hospitals up and down the country are extremely worried about the service they are going to be able to provide.”

At the heart of the dispute is a new contract which the government plans to impose on junior doctors that will enable NHS services to be organized in a way that makes it easier for patients to access care seven days a week. While the new contract will increase junior doctors' basic pay, it will reduce the number of weekly hours considered anti-social, and thus entitled for extra pay. For example, junior doctors will no longer be paid extra for daytime work on Saturdays. The doctors claim that the end result will be that they will be forced to work longer hours at anti-social times.