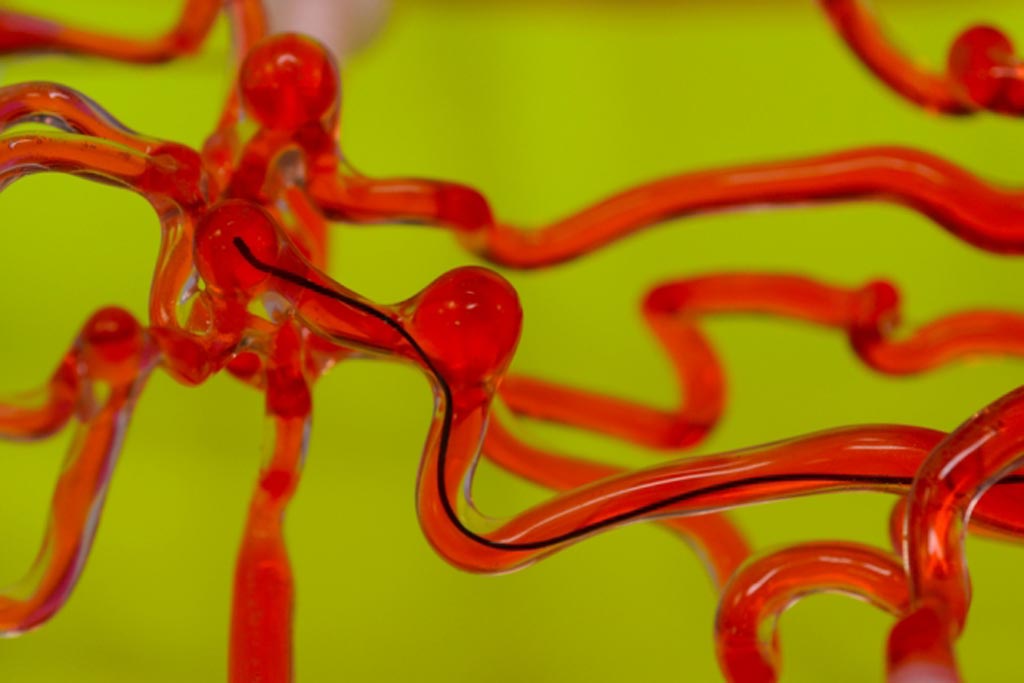 Image: A thread-like robot winds its way through a simulated brain (Photo courtesy of MIT).
A new study shows how a magnetically steerable miniature robot can actively glide through narrow, winding pathways, such as the labyrinthine vasculature of the brain.

Under development at the Massachusetts Institute of Technology (MIT; Cambridge, MA, USA), the self-lubricating soft continuum robot is composed of a core of nickel-titanium alloy, a homogeneous soft polymer matrix shell with uniformly dispersed ferromagnetic microparticles, and a biocompatible hydrogel skin that envelopes the surface, reducing friction by more than 10 times. The robots navigation is via omnidirectional steering based on magnetic actuation, enabled by programming ferromagnetic domains in the continuum soft body domain.

The robot is on the submillimeter-scale, and can be miniaturized below a few hundreds of micrometers in diameter, allowing it to navigate through complex and constrained environments. For the study, the researchers used a tortuous cerebrovascular silicon phantom with multiple aneurysms. The continuum robot was activated using a large magnet to steer it through the winding, narrow silicone vessels, which were filled with a liquid simulating the viscosity of blood. According to the researchers, the robot can also be functionalized so as to deliver clot-reducing drugs or break up blockages with laser light. The study was published on August 28, 2019, in Science Robotics.

“Existing platforms could apply magnetic field and do the fluoroscopy procedure at the same time to the patient, and the doctor could be in the other room, or even in a different city, controlling the magnetic field with a joystick,” said lead author Yoonho Kim, MSc, a graduate student in the MIT department of mechanical engineering. “Our hope is to leverage existing technologies to test our robotic thread in vivo in the next step.”

“Stroke is the number five cause of death and a leading cause of disability in the United States. If acute stroke can be treated within the first 90 minutes or so, patients' survival rates could increase significantly,” said senior author Xuanhe Zhao, PhD, an associate professor of mechanical engineering and of civil and environmental engineering at MIT. “If we could design a device to reverse blood vessel blockage within this ‘golden hour’, we could potentially avoid permanent brain damage. That's our hope.”