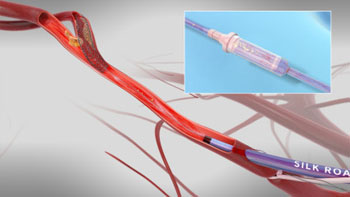 The Enroute NeuroProtection System (NPS) is designed to enable the insertion of a stent directly into the carotid artery in the neck, instead of using a percutaneous route through the groin and up the femoral artery, reducing the surgical risks and potential complications associated with more invasive procedures. In addition to TCAR access, the procedure also protects the brain during the intervention via flow reversal, a mechanism that redirects blood flow away from the brain so that it can carry any debris created to an external filter.

This high rate temporary blood flow reversal is important to help protect the brain from stroke while surgeons subsequently deliver the Enroute Transcarotid Stent (TNS), a self-expanding stent made of nickel-titanium (nitinol) alloy tubing, which is laser-cut into a mesh shape that opens automatically over the blockage. The Enroute NPS and TNS are products of Silk Road Medical (Sunnyvale, CA, USA), and have been approved by the US Food and Drug Administration (FDA).

“Whereas elsewhere in the body we routinely use minimally invasive endovascular techniques to treat vascular disorders, carotid artery disease is one of the last frontiers that is still treated primarily by an invasive surgical approach,” said Professor Ralf Kolvenbach, MD, director of the department of vascular surgery and endovascular therapy at Augusta Krankenhaus hospital (Düsseldorf, Germany). “With the Enroute NPS we can leverage surgical principles of neuroprotection like avoiding unprotected maneuvers, maintaining exquisite control of the carotid bifurcation and blood flow, and removing embolic fragments of any size.”

“We have been working to improve the safety profile of carotid revascularization through the development of the TCAR procedure, and this latest design of the Enroute NPS for TCAR is state-of-the-art,” said Antonio Orgaz, MD, chief of vascular surgery at Virgen de la Salud Hospital (Toledo, Spain). “We were extremely impressed with the smooth, atraumatic entry of the sheath into the carotid artery and the more ergonomic design of the overall system. It is easy to use and inspires confidence.”

Patients are typically referred for a carotid stent when they have a blockage of 70% or more in the carotid artery and are unsuitable candidates for endarterectomy, a procedure that involves general anesthesia, which could be dangerous for people with severe carotid blockages since they often also have blockages in other arteries, including the coronary arteries.