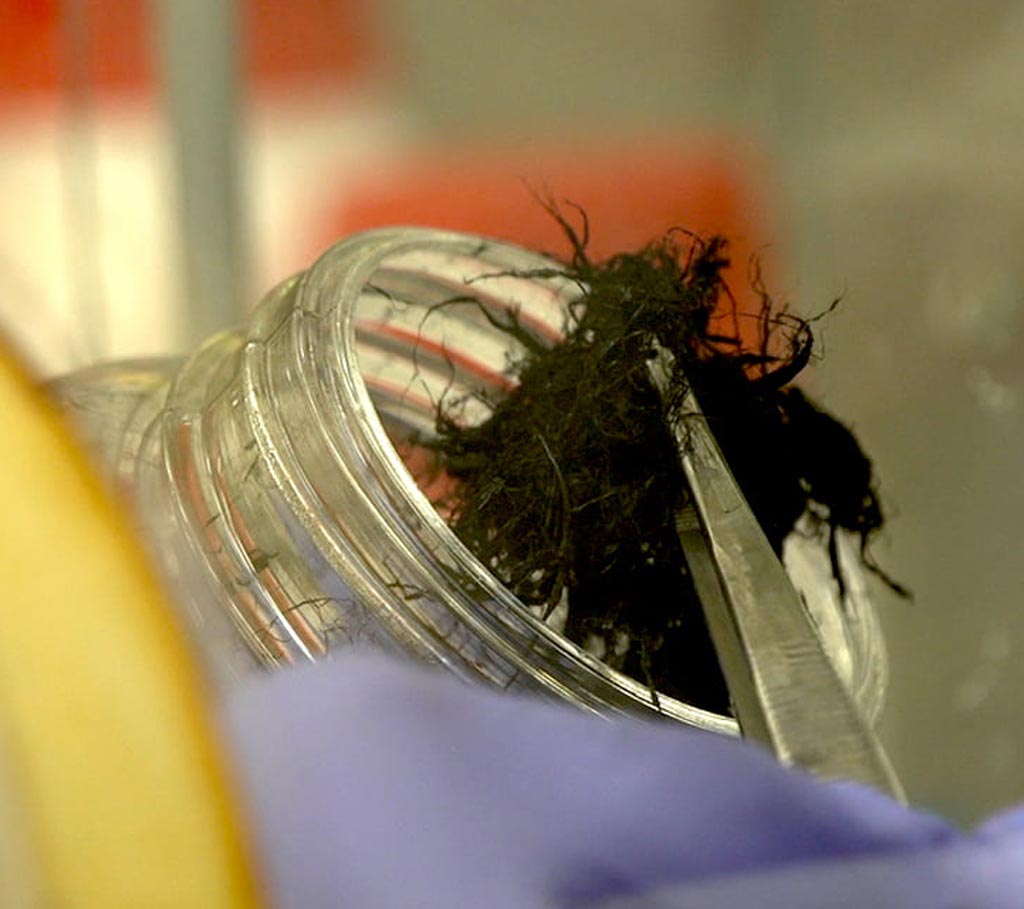 Image: A batch of CNTfs before being spun into sutures (Photo courtesy of Rice University).
A new study shows that carbon nanotube fibers (CNTfs) can restore electrical conduction in the diseased myocardium, offering a potential long-term restorative solution.

Researchers at the Texas Heart Institute (THI; Houston, TX, USA), Rice University (Rice, Houston, TX, USA), and other institutions conducted open chest electrophysiology studies to examine the characteristics of CNTfs, which combine the mechanical properties of surgical suture materials and the conductive properties of metals, and their suitability as a restorative solution to impaired myocardial conduction. To do so, the researchers first used radiofrequency (RF) ablation to create an epicardial conduction delay. They then sutured CNTf sutures over the conduction block.

The results revealed that in large animals (sheep), an improvement in conduction velocity using CNTf was demonstrated. In an acute rodent model, in which the CNTfs were surgically sewn across the right atrioventricular junction, ventricular pre-excitation was shown during sinus rhythm. All chronic cases demonstrated resumption of atrioventricular conduction, but these required atrial pacing. There was no gross or histopathologic evidence of toxicity. Ex-vivo electrical analysis of the CNTf-myocardial interface demonstrated contact impedance significantly lower than that of platinum iridium. The study was published on August 12, 2019, in Circulation: Arrhythmia and Electrophysiology.

“Instead of shocking and defibrillating, we are actually correcting diseased conduction of the largest major pumping chamber of the heart by creating a bridge to bypass and conduct over a scarred area of a damaged heart,” said co-lead author cardiologist Mehdi Razavi, MD, of THI. “Our experiments provided the first scientific support for using a synthetic material-based treatment rather than a drug to treat the leading cause of sudden death in the United States and many developing countries around the world.”

“Flexibility is important, because the heart is continuously pulsating and moving, so anything that’s attached to the heart’s surface is going to be deformed and flexed. Good interfacial contact is also critical to pick up and deliver the electrical signal,” said co-lead author chemical and biomolecular engineer Matteo Pasquali, PhD, of Rice. “In the past, multiple materials had to be combined to attain both electrical conductivity and effective contacts. These fibers have both properties built in by design, which greatly simplifies device construction and lowers risks of long-term failure due to delamination of multiple layers or coatings.”

CNTfs are about a quarter of the thickness of a human hair, but still contain millions of microscopic nanotubes of pure carbon. The fibers, which are soft, flexible, and tough, also exhibit low electrical impedance. As such, they show potential for many applications, including helping Parkinson's disease (PD) patients who require brain implants to treat their neurological conditions.