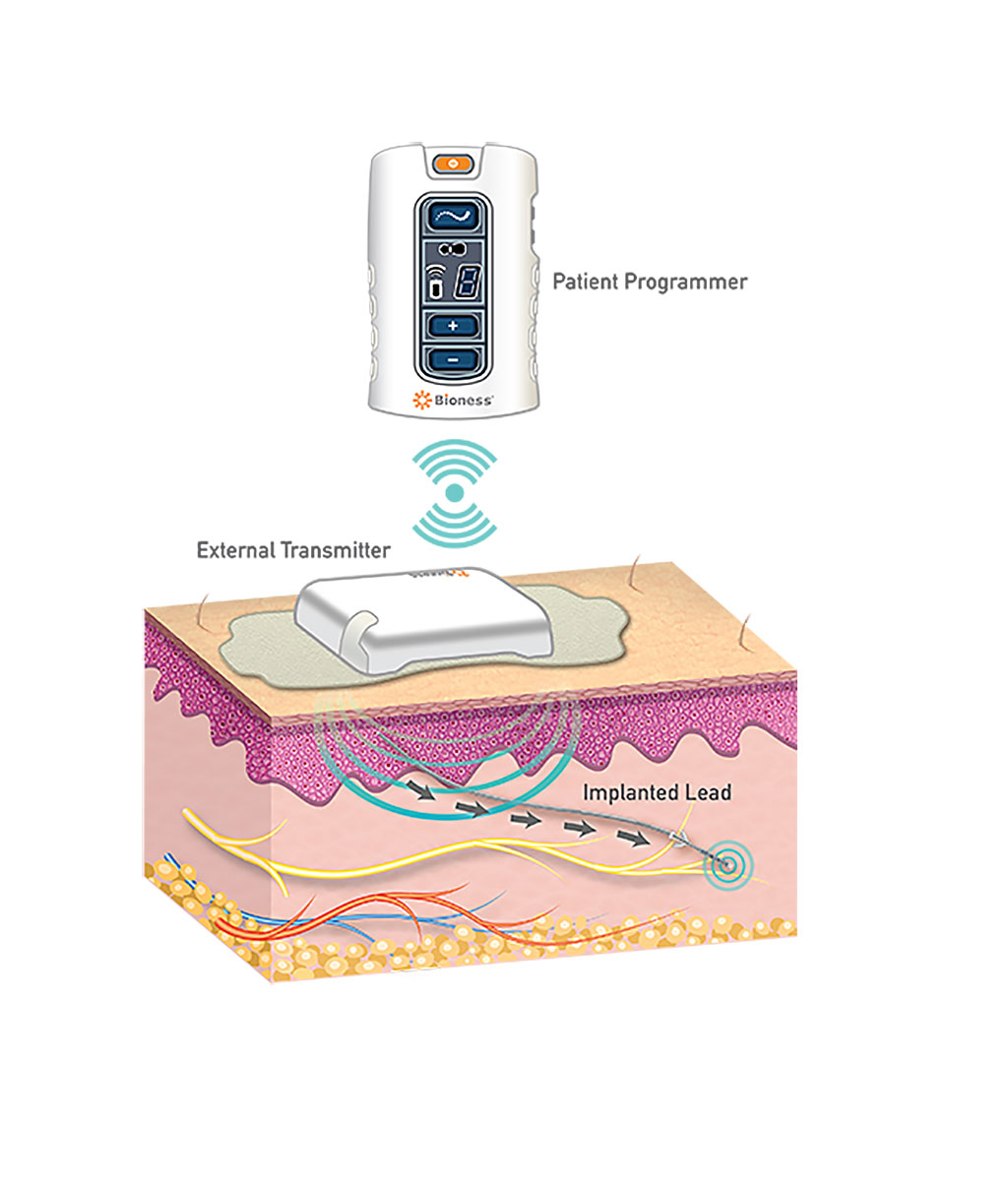 Image: The StimRouter neuromodulation system (Photo courtesy of Bioness)
Stimulation of the infrapatellar branch of the saphenous nerve with an implantable electrical device could ease intractable knee pain, according to a new study.

For the study, researchers at Stanford University (CA, USA) surgically implanted five patients with intractable knee pain with the Bioness (Valencia, CA, USA) StimRouter neuromodulation system, a minimally invasive device consisting of a thin, implanted lead fitted with a conductive electrode, an external pulse transmitter (EPT), and a wireless patient programmer. Electrical signals are transmitted transdermally from the EPT to a disposable user patch, down the lead to the implanted electrode, and from there to the nerve.

Study participants underwent a diagnostic saphenous nerve block, with the rationale being that if the block successfully reduced knee pain by 50% or more in the short term, patients would likely respond well to the implant. The results showed that before StimRouter implantation, the average pain intensity was 7.8 out of 10 on a visual analog scale (VAS). Following implantation, average pain intensity at one year was 1.5, and at two years it was 2.75. The study was presented at the American Academy of Pain Medicine annual meeting, held during March 2020 in National Harbor (MD, USA).

“We have a lot of patients with chronic knee pain, and unfortunately, our hands are tied in terms of what we can do for them. Here we are using an alternative therapy called peripheral nerve stimulation of the saphenous nerve,” said lead author Kwo Wei David Ho, MD, PhD. “This provides a way to relieve pain without nerve destruction or motor dysfunction. What we've been noticing in our series is that after a while, patients are using less and less, and the pain gets better and better, and eventually they stop using it entirely because the pain completely resolves.”

Neuromodulation involves modification of nerve activity by delivering electrical or pharmaceutical agents directly to a target area. Electrical neuromodulation devices use precisely placed leads that connect via an extension cable to a pulse generator and power source, which generates the necessary electrical stimulation. A low-voltage electrical current passes from the generator to the nerve, and can either inhibit pain signals or stimulate neural impulses where they were previously absent.