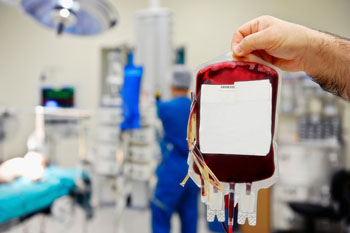 Researchers at Massachusetts General Hospital (MGH; Boston, USA), Harvard Medical School (HMS; Boston, MA, USA), and other institutions conducted a trial to see if treating stored packed sheep RBCs with NO before transfusion could prevent PH. To do so, cohort sheep were transfused with autologous RBCs treated with NO and stored for 40 days; control sheep received stored RBCs not exposed to NO. Pulmonary and systemic hemodynamic parameters were monitored before, during, and after transfusion.

The researchers found that transfusing RBCs that had not been pretreated with NO nearly doubled the constriction of blood vessels in the lungs, compared to RBCs pretreated with the gas. In addition, treatment with NO increased the survival of stored RBCs after transfusion. Using biotin labeling to measure RBC circulating lifespan, they found that in 40-day-old pretreated RBCs, 87% of the cells remained in circulation after one hour, compared with 75% of non-treated RBCs. The study was published in the November 2016 issue of Anesthesiology.

“Blood transfusions are one of the top five medical procedures performed by physicians worldwide. Extended storage of RBCs makes them rigid and decreases their ability to change shape, which is necessary as they travel through small blood vessels,” said lead author Warren Zapol, MD, director of the Anesthesia Center for Critical Care Research at MGH. “We found that pretreatment with nitric oxide actually rejuvenates RBCs, making them more flexible so they can more easily travel through blood vessels. This can further reduce the risk of pulmonary hypertension.”

The U.S. Food and Drug Administration (FDA) allows transfusion of human RBCs that have been stored for up to 42 days. But recent studies suggest that transfusion of RBCs stored for more than 30 days may lead to elevated PH and reduced survival of the transfused cells, which can cause hypoxia and even heart failure. Each year, approximately 326,000 patients in the United States alone receive one or more RBC units that have been stored for more than 30 days.