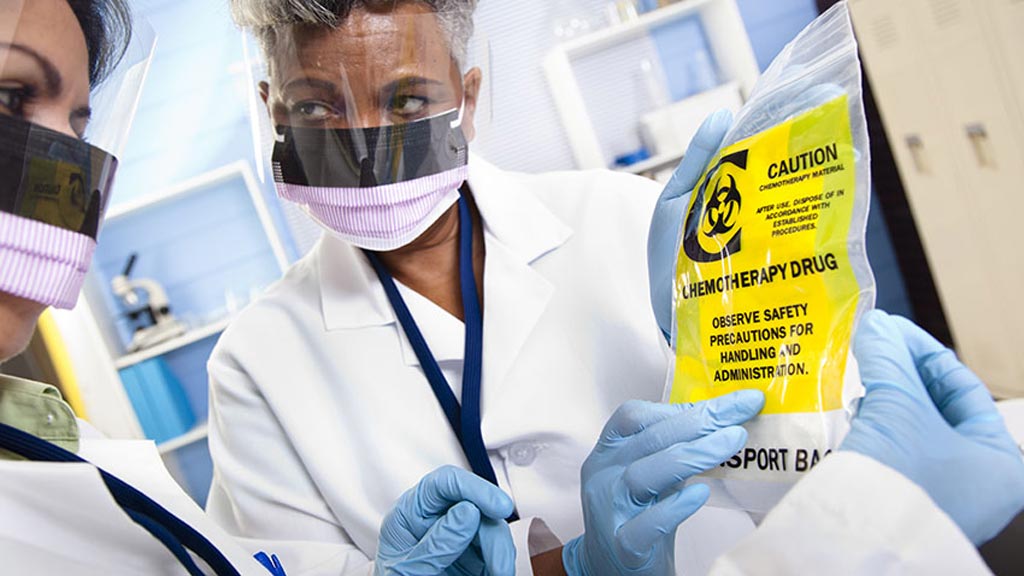 Image: Many oncology nurses do take necessary precautions when handling chemotherapy (Photo courtesy of U-M).
A new study concludes that the use of personal protective equipment (PPE) use among oncology nurses who handle hazardous drugs is suboptimal at best.

Researchers at the University of Michigan (U-M; Ann Arbor, USA) conducted a cluster randomized trial that included 257 nurses from 12 ambulatory oncology settings between 2015 and 2017 across the United States. In one arm, 136 nurses received a one-hour educational module on PPE use with quarterly reminders; in the other, 121 nurses received a one-hour educational module, tailored messages to address perceived barriers, and quarterly data gathered on chemotherapy drugs spills and plasma samples for analysis. The primary outcome was nurse-reported PPE use.

The results revealed that after two years, both control and intervention sites reported suboptimal PPE use, with no significant differences observed in PPE use knowledge or perceived barriers. Conversely, study participants reported high satisfaction with the study experience. The study was published in the March 2019 edition of Oncology Nursing Forum.

“This is an invisible threat. It’s unlike the needle stick, where you know when you’ve been stuck by a needle. Early on we could understand that a needle stick conveyed serious health risks. With chemotherapy exposure, we don’t have that smoking gun,” said lead author Professor Christopher Friese, PhD, RN, of the U-M Rogel Cancer Center. “This is a subtle threat, but it’s a daily threat. As a practicing nurse it’s disappointing; we were hoping we could develop a bundled intervention that cancer centers and others can use.”

Guidelines from professional societies recommend handling chemotherapy drugs using protective gear that includes double gloving, eye protection, respirators, and a thick, disposable gown made from a fabric of low permeability with back closure. Eye and face protection is also advised when splashing is a risk. However, not using protective gear is common, according to an anonymous poll conducted at the 2016 Oncology Nursing Society annual meeting. More than one third of respondents said they did not change their gown or double-glove, because the equipment was not conveniently located. Others said they skipped wearing the gear because it was too uncomfortable.