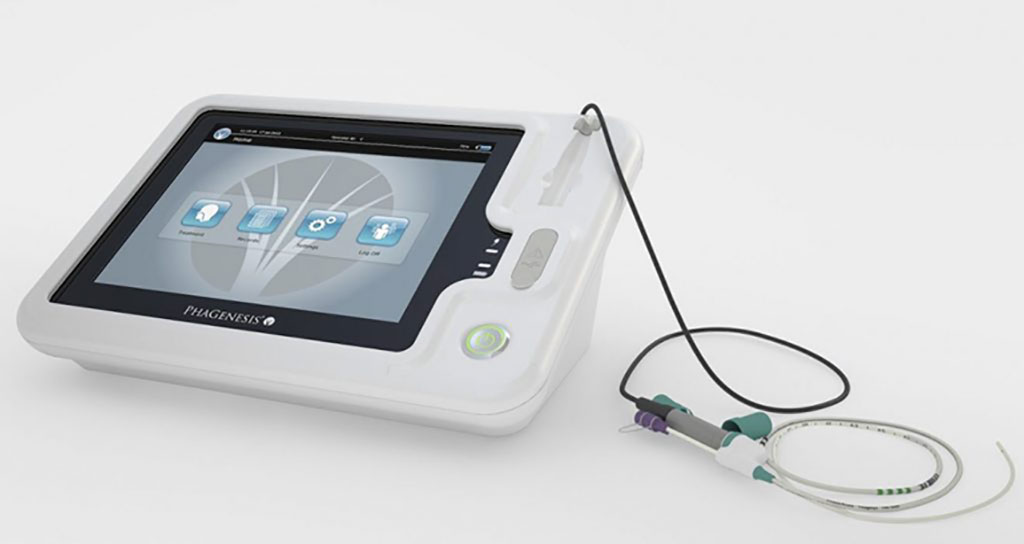 The Phagenesis (Manchester, United Kingdom) Phagenyx System is designed to deliver PES pulses to the oropharynx, which then travel back along nerves to the brain areas that control swallowing, inducing and accelerating the reorganization of these areas to restore swallow coordination and control by modifying peripheral sensory architecture. The system is intended for use for both stroke patients, but also for critically ill mechanically ventilated patients, who due to the breathing tube, suffer reduced afferent sensitivity within the pharynx and disruption of neurological swallowing control.

The Phagenyx device consists of a battery powered console connected to a catheter inserted through the nose, into the throat, and down into the stomach. On the catheter are two electrodes through which it delivers PES pulses to the pharynx. Guide marks on the catheter help position the electrodes correctly and indicate whether good contact has been achieved. The console is operated by a touch screen and controls and monitors treatment delivery, usually 10 minutes a day for three consecutive days. When not in use, the catheter is left in position, and can be used as a feeding tube.

“Dysphagia is a frequent complication and may be life-threatening. Patients suffering from dysphagia after traumatic brain injury or after prolonged mechanical ventilation equally benefit from this novel treatment,” said Reinhard Krickl, CEO of Phagenesis. “In times of health emergency such as the ongoing pandemic, reduced reintubation rates and faster ICU discharge significantly alleviate the pressure on ICU bed capacity and free up critical resources.”

Dysphagia is defined as a swallowing difficulty, ranging from mild to an inability to swallow at all, which may result from numerous etiologies, including damage to the central nervous system (CNS) and/or cranial nerves (such as in stroke and traumatic brain injury (TBI). It may also occur following critical care interventions, such as intubation and tracheostomy.