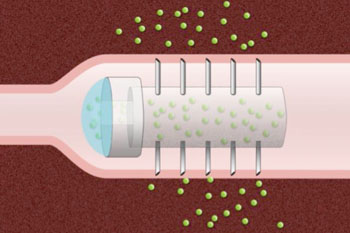 Image: A schematic drawing of a micro-needle pill with hollow needles (Photo courtesy of Christine Daniloff/MIT).
An innovative capsule coated with tiny needles can deliver drugs directly into the lining of the gastrointestinal (GI) tract.

Researchers at MIT (Cambridge, MA, USA) and Massachusetts General Hospital (MGH; Boston, MA, USA) have devised a novel acrylic drug capsule, two centimeters long and one centimeter in diameter, which includes a drug reservoir and is coated with hollow, stainless steel needles about five millimeters long. A pH-sensitive coating that surrounds the capsule dissolves in the GI tract, allowing the drug to be released through the micro-needles. To test whether the capsule allows safe and effective drug delivery, the researchers tested it in pigs, with insulin as the drug payload.

It took more than a week for the capsules to move through the entire digestive tract, successfully injecting insulin into the lining of the stomach, small intestine, and colon, causing the animals’ blood glucose levels to drop. The reduction in blood glucose was faster and larger than the drop seen when the same amount of insulin was given by a subcutaneous injection. The researchers found no traces of tissue damage, supporting the potential safety of the approach. The study was published on September 22, 2014, in the Journal of Pharmaceutical Sciences.

“This could be a way that the patient can circumvent the need to have an infusion or subcutaneous administration of a drug,” said lead author gastroenterologist Giovanni Traverso, MD, of MGH. “The kinetics are much better, and much faster-onset, than those seen with traditional under-the-skin administration. For molecules that are particularly difficult to absorb, this would be a way of actually administering them at much higher efficiency.”

While both patients and physicians prefer the oral route of drug delivery, the GI tract itself limits deliverability of the biologic class of therapeutics, whose large size makes them non-absorbable. And due to its protease and bacteria-rich environment, as well as general pH variability, an extreme environment is created which degrades the biologics by acid and enzyme activity that make them inactive before they can take effect.

Previous studies of accidental ingestion of sharp objects in human patients have suggested that it could be safe to swallow a capsule coated with short needles. Because there are no pain receptors in the GI tract, patients would not feel any pain from the drug injection.