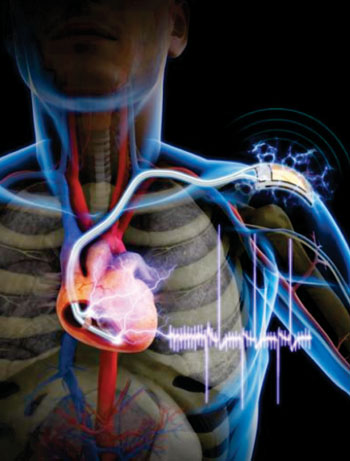 The researchers succeeded in harvesting energy that reached up to 8.2 V and 0.22 mA by the bending and pushing motions of the crystal, which were high enough values to directly stimulate the rat's heart. According to the researchers, the technology could potentially facilitate the use of self-powered flexible energy harvesters, not only prolonging the lifetime of cardiac pacemakers but also for realizing real-time heart monitoring. The study was published online ahead of print on April 2014 in Advanced Materials.

“For clinical purposes, the current achievement will benefit the development of self-powered cardiac pacemakers as well as prevent heart attacks via the real-time diagnosis of heart arrhythmia,” said lead author Prof. Keon Jae Lee, PhD, of the department of materials science and engineering. “In addition, the flexible piezoelectric nanogenerator could also be utilized as an electrical source for various implantable medical devices.”

Repeated surgeries to replace pacemaker batteries have exposed elderly patients to health risks such as infections or severe bleeding during the procedures.