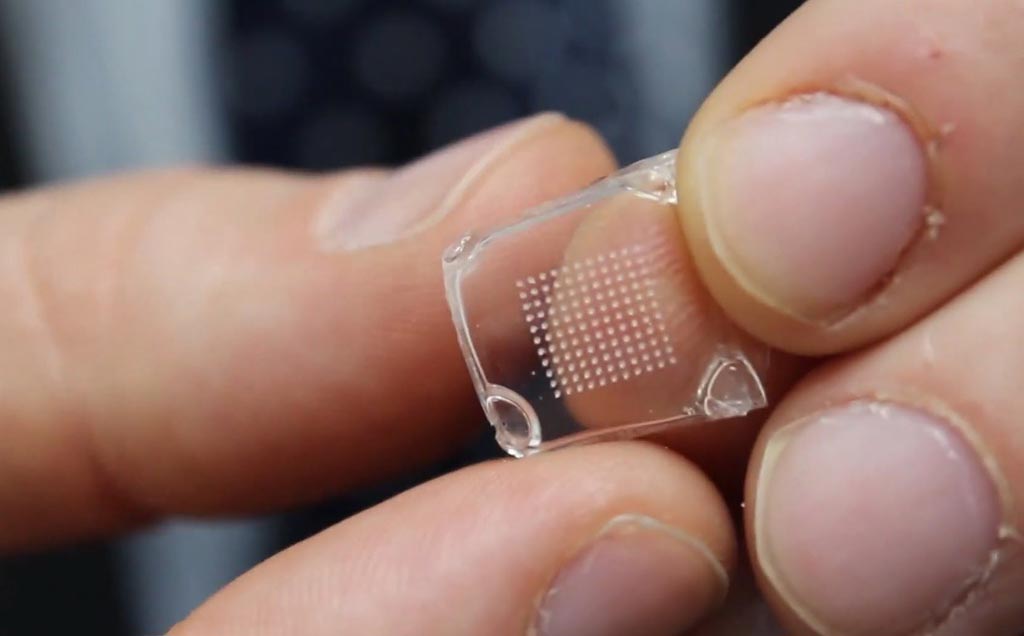 Image: An example of a hydrogel microneedle patch (Photo courtesy of Ryan Donnelly/QUB).
A new study describes how a microarray patch that administers drugs directly into the bloodstream could provide an answer to the antibiotic resistance crisis.

Under development at Queen's University Belfast (QUB; United Kingdom), the unique antibiotic patch containing multiple 400 μm hydrogel-forming microneedle arrays that painlessly pierce the skin, turning into a gel-like material that consistently keeps the micropores open at an approximate 200 μm diameter. This provides a new avenue for delivering antibiotics directly into the bloodstream, thus bypassing the antibiotic-resistant gut bacteria and extending the lifespan of currently available antibiotics.

According to the researchers, oral administration of antibiotics contributes significantly to development of antibiotic resistance, since small quantities of the drug often finds its way into the colon, a perfect breeding ground for imminent drug-resistant bacteria. Injection of the antibiotic directly into the blood stream can significantly reduce the development of resistance amongst gut bacteria relative to oral administration, especially if the antibiotic is predominantly excreted through the kidneys. The study was published on December 2, 2017, in Journal of Controlled Release.

“For the first time, we’re in control of the rate at which medicine goes into the skin. We hope to show that this unique antibiotic patch prevents resistance development,” said study co-author professor of pharmaceutical technology Ryan Donnelly, PhD. “If we are successful, this approach will significantly extend the lifespan of existing antibiotics, allowing time for development of the next generation of antibiotics. In doing so, this work has the potential to save many lives.”

Microneedles as a technique for drug delivery enhancement were primarily designed for facilitating percutaneous drug delivery. Since the emergence of solid microneedles two decades ago, which simply pierced the stratum corneum in order to enhance topical drug delivery, the technique has progressed in various modifications such as hollow, coated, dissolving, and hydrogel forming microneedles. In their turn, the modifications have resulted in new mechanisms of drug delivery enhancement, followed by an expansion of applicability range in terms of targeted tissues and organs.