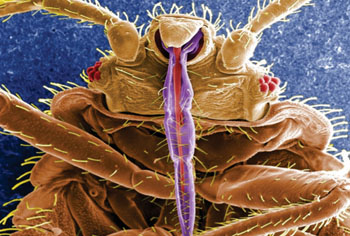 Researchers at Simon Fraser University (Burnaby, BC, Canada) used nuclear magnetic resonance (NMR) spectrometers to study the infinitesimal amounts of chemicals shed from human skin, looking for the chemical clues as to why the bedbugs find it so appealing. After two years of frustrating false leads, they finally discovered that histamine, a molecule with unusual properties that eluded identification through traditional methods, signals "safe shelter" to bedbugs. Once in contact with the histamine, the bedbugs stay in place, independent of whether or not they recently fed on a human host.

But when the researchers set out to test the compounds in infested apartments, neither histamine alone nor in combination with other previously identified pheromone components effectively attracted and trapped the bedbugs. The researchers therefore began analyzing airborne volatile compounds from bedbug feces as an alternate source of the missing components. Five months and 35 experiments later, they found three new volatiles that had never before been reported in the context of bedbugs.

The final aggregation pheromone is comprised of five volatile components (dimethyl disulfide, dimethyl trisulfide, (E)-2-hexenal, (E)-2-octenal, 2-hexanone), which attract bed bugs to safe shelters, and one less-volatile component (histamine), which keeps them there. The blend of all six components was highly effective at luring both juvenile and adult bed bugs into traps, with or without recent blood meals. The study was published on December 21, 2014, in Angewandte Chemie.

“The biggest challenge in dealing with bedbugs is to detect the infestation at an early stage,” said lead author Prof. Regine Gries, PhD. “This trap will help landlords, tenants, and pest-control professionals determine whether premises have a bedbug problem, so that they can treat it quickly. It will also be useful for monitoring the treatment's effectiveness.”

Over the last two decades the common bedbug, once thought eradicated in industrialized countries, has reappeared as a global scourge, infesting not only low-income housing but also hotels, public venues such as stores, movie theatres, libraries, and even public transit. And while previously not considered a carrier of disease, it has recently been discovered they can transmit the pathogen that causes Chagas disease, which is prevalent in Central and South America.