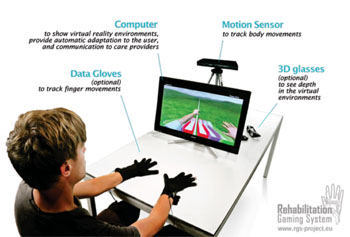 Researchers at Universitat Pompeu Fabra (UFP; Barcelona, Spain), Hospital Universitari Vall d'Hebron (Barcelona, Spain), and other institutions conducted a small pilot study in 20 hemiparetic stroke patients that played a Rehabilitation Gaming System (RGS) using a Microsoft Kinect sensor and optional gloves to track their movement. The system allowed the users to control a virtual body via their own movements on a computer screen, as seen from a first-person perspective.

The participants were asked to perform various tasks in a virtual world. In some of these tasks, the researchers enhanced the paretic limb’s virtual movements, making it appear faster, more accurate, and easier to reach the target on screen. These amplifications were introduced and suppressed in a gradual fashion to keep participants unaware of the manipulations. Following these manipulations, the participants’ performance in the unamplified task was recorded, including the likelihood of them using their paretic limb.

The researchers found that that there was a significantly higher probability that the patient would select their paretic limb for reaching towards a virtual target after the intervention, even when there was no amplification of movement in the session, and with the patient unaware of the previous session’s manipulation. After experiencing the amplification of the paretic limb in virtual reality, the patients also performed wider pointing movements towards targets appearing in the non-paretic workspace. The study was published in the June 2015 issue of Journal of NeuroEngineering and Rehabilitation.


“After enhancement of movement, patients started using their paretic limb more frequently. This suggests that changing patients' beliefs on their capabilities significantly improves the use of their paretic limb,” said lead author Belén Rubio, PhD, of the synthetic, perceptive, emotive, and cognitive systems lab at UFP. “This therapy could create a virtuous circle of recovery, in which positive feedback, spontaneous arm use, and motor performance can reinforce each other.”

Following stroke, loss of neural tissue induces drastic neurophysiological changes that often result in cognitive and motor impairments, such as hemiparesis; to counteract these deficits, patients tend to introduce compensatory movements, such as over-utilizing their non-paretic limb. Although these compensatory strategies may immediately improve functional motor performance in daily living or reduce the burden of using the paretic limb, a long period of non-use of the affected limb can lead to further loss of neural and behavioral function.