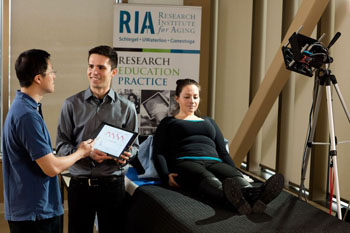 Image: Prof. Alexander Wong and Robert Amelard analyze blood-flow data extracted with the new touchless device (Photo courtesy of Fred Hunsberge/Waterloo University).
A novel system based on transmittance photoplethysmographic imaging (PPGI) can be used as an alternative for measuring blood pulse signals at a distance.

Developed by researchers at the University of Waterloo (Canada), the patent-pending device monitors a patient's blood flow at multiple arterial points simultaneously, without direct contact with the skin, using a technology called coded hemodynamic imaging; temporally coded illumination (TCI) is used for ambient light correction. The device relays the measurements from all of the pulse points to a signal processing pipeline for PPGI signal extraction, thus allowing for continuous monitoring.

Experimental results have shown that the processing steps yield a substantially more pulsatile PPGI signal than the raw acquired signal, resulting in statistically significant increases in correlation for both short- and long-distance monitoring. According to the researchers, long-distance heart rate monitoring using the device is ideal for assessing patients with painful burns, highly contagious diseases, or infants in neonatal intensive care units (nICUs), whose miniscule fingers make traditional monitoring difficult. The study was published on October 6, 2015, in Nature Scientific Reports.

“Since the device can also scan multiple patients individually at once and from a distance, consider the potential in mass emergency scenarios or long-term care homes,” said senior author Prof. Alexander Wong, PhD, of the faculty of engineering. “This technology provides for a more predictive approach to monitor vitals and the potential for its use is extensive, such as indicating arterial blockages that might otherwise go undetected, or warning older adults who risk falling as a result of getting dizzy when they stand.”

PPG was invented in the 1930’s to detect changes in light intensity, serving as a proxy measure for changes in blood volume in a particular area of the body. Until now, PPG has only been effective when it was used in close proximity with the patient's body, but the new device is equipped with sensors that are able detect hemodynamic waveforms from a distance.