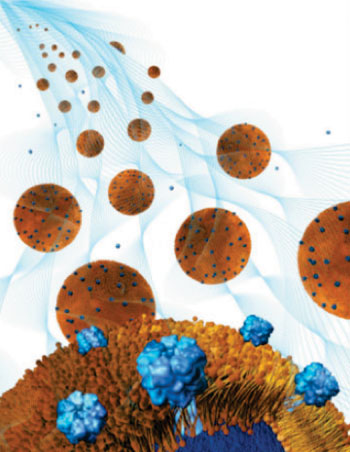 Researchers at the University of California, San Diego (UCSD; USA) and Fudan University (Shanghai, China) developed the unihybrid nanomaterial by mixed nanosponges—nanoparticles coated in a red blood cell (RBC) membrane that absorb dangerous toxins produced by MRSA, E. coli, and other antibiotic-resistant bacteria—into a hydrogel made of water and polymers. The optimized hydrogel composition helps retain the toxin-absorbing nanosponges (masquerading as RBCs) in place, while not compromising toxin transport into the gel for neutralization.

Just one RBC membrane can be used to make thousands of polymer core nanosponges, each with a diameter of approximately 85 nanometers, i.e., 3,000 times smaller than the original RBC. The number of toxins each nanosponge could absorb depended on the toxin; in the case of MRSA, one nanosponge can absorb approximately 85 alpha-hemolysin toxins. The nanosponges have a half-life of 40 hours and eventually are metabolized, together with the sequestered toxins, in the liver.

In a murine model, MRSA infected skin lesions that were treated with the nanosponge-hydrogel were significantly smaller than those that were left untreated. The researchers also showed that two days after they were injected underneath the skin of a mouse, nearly 80% of the nanosponge-hydrogels were still found at the injection site. When the nanosponges were injected without the hydrogel, only 20% of them remained at the injection site after just two hours, with most of them diffusing to the surrounding tissues. The study was published on April 31, 2015, in Advanced Materials.

“We combined the strengths of two different materials, nanosponges and hydrogels, to create a powerful formulation to treat local bacterial infections,” said senior author Prof. Liangfang Zhang, PhD, of the school of engineering. “Nanosponges alone are difficult to use on local tissues because they diffuse away to other parts of the body very quickly. By integrating the nanosponges into a hydrogel, we can retain them at the site of infection.”