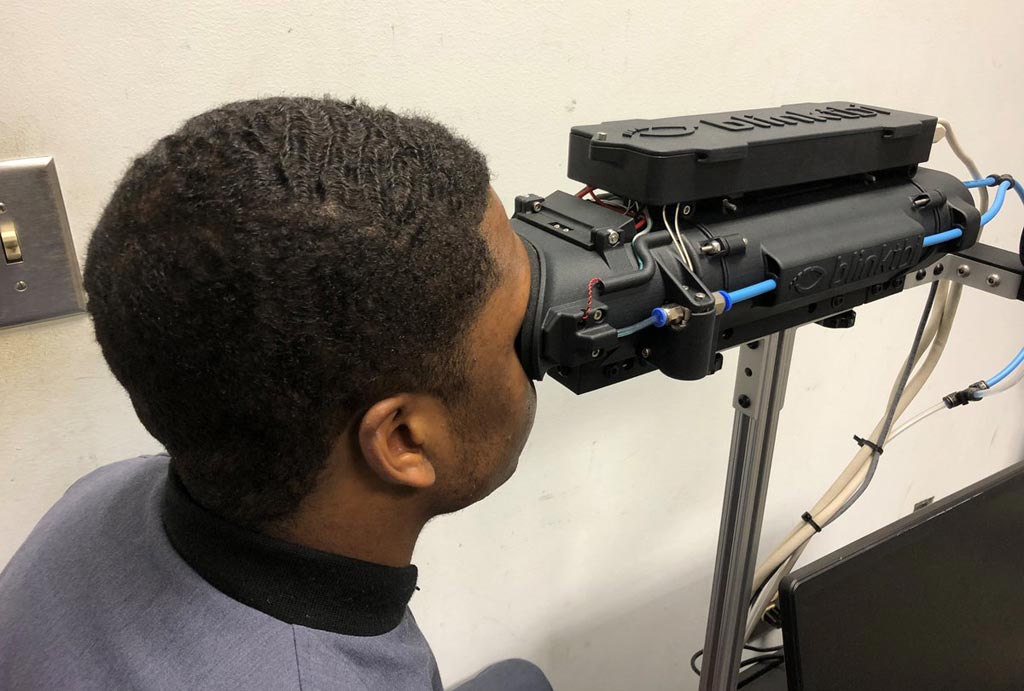 Image: The Blink Reflexometer measures the blink reflex of a cadet at the Citadel (Photo courtesy of The Citadel).
A new study suggests that measuring blink reflex parameters my offer a reliable tool for identifying concussion head injuries and other neurological disorders.

Developed at The Military College of South Carolina (The Citadel; Charleston, SC, USA) and the Medical University of South Carolina (MUSC; Charleston, USA), the Blink Reflexometer is a high-speed videography-based device that triggers, records, and analyzes detailed information on a person's blink reflex. The person being evaluated wears a mask that delivers three to five air puffs at random intervals over 20 seconds to the outer corner of the right or left eye (randomly selected).

After approximately 20 seconds of rest, two more sets of puffs are delivered to complete the session, for a total of 6 to 12 puffs per session. The blink reflex is recorded at 280 frames/second and specific frames are then isolated and analyzed. To validate the device, the researchers collected blink reflex data from 24 male football players (18-22 years of age) over the 2015-2016 athletic seasons. Preseason baseline values were established for ten blink reflex parameters, athletic history, physical examination, balance parameters, and neurocognitive test scores.

“A human's blink reflex has a long pathway, originating at the facial area and continuing to the brain stem. If any place along that pathway is damaged, changes in the blink reflex can indicate that there is a potential problem,” said lead author Professor Dena Garner, PhD, of The Citadel. “We now know that concussions and normal play both affect the blink parameters, but in differing directions. Our observations identified something distinctly different occurring in the concussion brains that can serve as a valuable new indicator for diagnosing the condition.”

The blink reflex is a primitive brainstem response to an external stimulus, such as air, visual cues, or electrical signals, which is affected by multiple neurological disorders, including those that affect the dopaminergic circuit that controls the eyelid. Previous studies using electromyography (EMG) have shown that diffuse axonal injury and exercise result in measurable changes in the blink reflex.