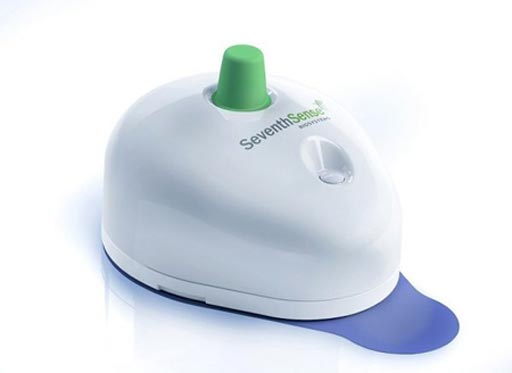 The Seventh Sense Biosystems TAP device offers a virtually painless alternative to traditional blood draws that involve puncturing a vein or lancing a finger. Roughly the size of a stethoscope’s bell, the TAP is first placed on the upper arm with an adhesive strip. Blood collection starts with a simple press of the button prominently located on top of the device. This action fires a ring of 30 spring-loaded microneedles--each one smaller than an eyelash--to puncture the skin and draw blood.

The pressure differential between the device’s interior chamber and the skin causes capillary blood to be drawn by vacuum into the device. The complete process typically takes 2-3 minutes, and withdraws about 100 microliters of blood, enough for most common blood tests. The resulting sample is then anticoagulated and stored in the device for transport to a lab for HbA1c testing. According to 7SBio, it is working with the U.S. Food and Drug Administration (FDA) to expand the use of TAP for additional tests, as well as "at home" collection.

“The needles are so small and are deployed and retracted so rapidly so patients don’t actually feel them compared to venipuncture. This could cut down on the number of patients who delay or forgo doctor’s visits because of the blood draw,” said Howard Weisman, CEO of 7SBio. “No one likes getting blood drawn, but blood is the single-most important source of medical information in healthcare today, with about 90% of all diagnostic information coming from blood and its components.”

“It's shocking that with all of the healthcare innovation we've seen in the past few decades, blood collection has lagged so far behind, and is still a primitive and difficult process for so many people,” said chemical engineer Professor Robert Langer, PhD, co-founder 7SBio. “I, and so many people I know, have always disliked needles, so it's exciting and fulfilling to receive FDA clearance after a terrific effort by our team. We had the opportunity to take our idea and create a device that fundamentally transforms the way blood is drawn, using microneedles smaller than an eyelash.”

Blood draw procedures occur 350 million times annually in the United States alone. Almost 28% of adult venipunctures and 44% of pediatric venipuncture draws require more than one attempt to successfully draw blood, and around 10% of children 3-10 years old must be physically restrained for a needle-based blood draw. Blood draws thus create disruptions for patients and clinicians alike, and are associated with significant direct and indirect costs, with accidental needle sticks costing hospitals upwards of USD 50 million per year.