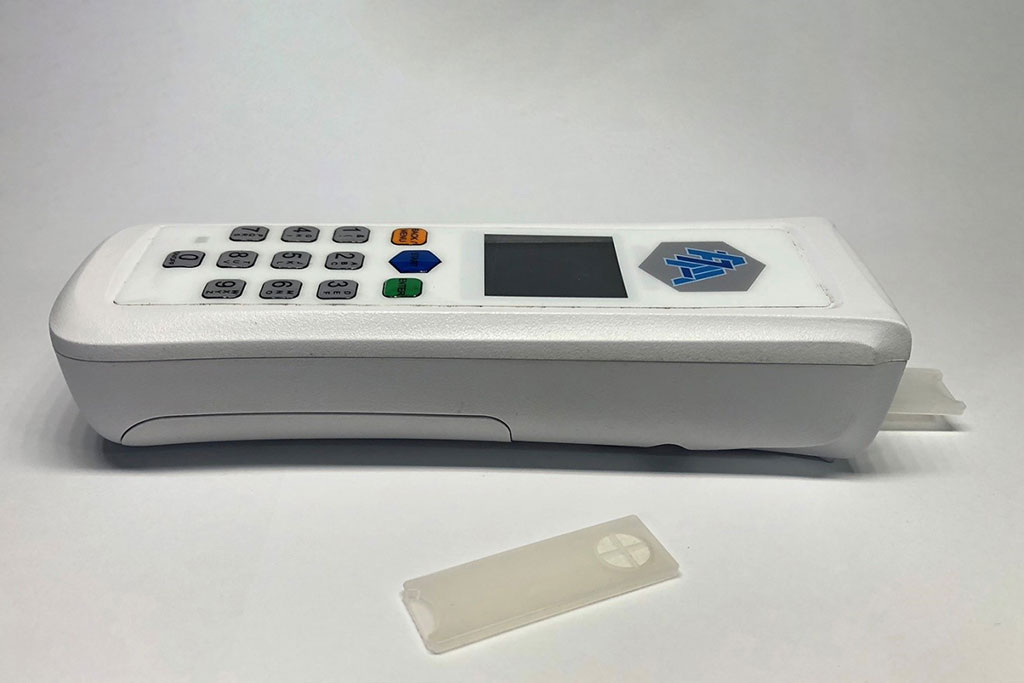 Image: A prototype of the handheld ammonia blood detector and associated test strips (Photo courtesy of Thomas Veltman).
Ammonia is a natural product of digestion that is usually processed into urea by the liver and passed out of the body in urine. Too much ammonia in the blood can cause mental and physical dysfunction and is a concern for people with liver disease or genetic conditions that hinder ammonia metabolism.

Biochemists at Stanford University (Stanford, CA, USA) developed a method to measure ammonia from small-volume whole blood samples in two minutes. The method alkalizes blood to release gas-phase ammonia for detection by a fuel cell. The device requires about one drop of blood, less than 1% of the blood for the standard test, and thus can be obtained with a small finger or earlobe prick. The device itself is about the size of a television remote and, as with a glucometer, the blood drops are dabbed onto a test strip that is inserted into one end.

While the sensor inside the device is very similar to existing ammonia sensors (used to detect toxic ammonia gas in industrial settings), the test strips are made from scratch. Blood applied to a small hole at one end of the strip zips through a microscopic channel and sinks into a paper-lined well at the opposite end, which is coated with an inexpensive chemical that liberates the ammonia from the sample. Inside the device, this well sits directly under the ammonia sensor. The device was tested on both adult and pediatric blood samples and showed a strong correlation with an academic clinical laboratory for plasma ammonia concentrations up to 500 μM (16 times higher than the upper limit of normal).

Natalia Gomez-Ospina, MD, PhD, an assistant professor of pediatrics and co-author of the paper, said, “I've spoken with families who have children with metabolic diseases about having this kind of device and it makes them emotional because, for them, the consequences of not getting ammonia checked accurately and quickly are so severe. For these families, it could be life-changing.” The study was published on June 15, 2020 in the journal ACS Sensors.