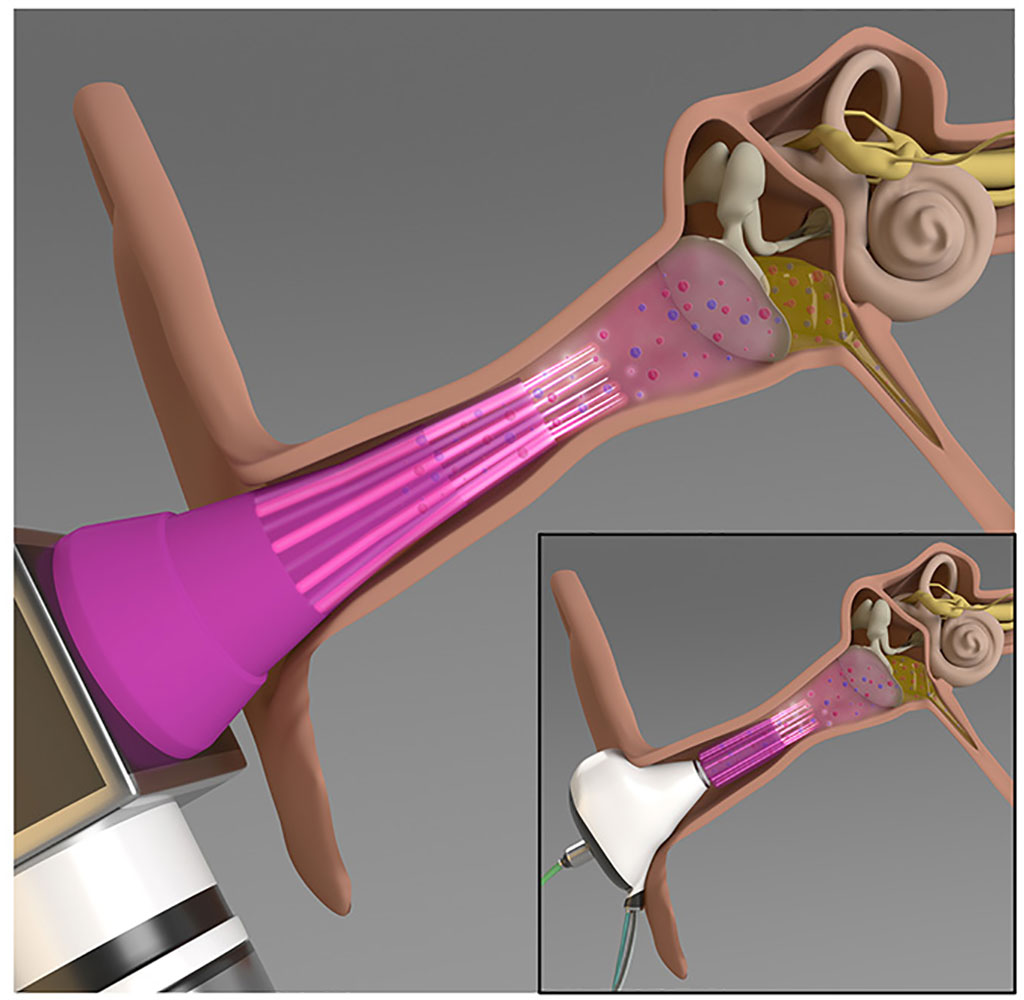 Image: The cold plasma-integrated otoscope and earbud for the treatment of otitis media (Photo courtesy of UIL)
A miniaturized 3D-printed otoscope generates a cold plasma jet composed of charged particles and reactive molecules that can inactivate various pathogens, claims a new study.

Developed at the University of Illinois (UIL; Urbana-Champaign, USA), the new microplasma device is made of a transparent polymer through 3D printing. The electrode arrays are installed into pre-assigned microchannels that extend through the device, with the microplasma jets generated and confined in the microchannel array. A model of the middle ear, constructed from an excised rat eardrum, was used to test the antimicrobial effects of the new otoscope on Pseudomonas aeruginosa bacteria located behind the eardrum.

The results showed disruption of planktonic and biofilm P. aeruginosa by the long-lived reactive species generated by microplasma, as well as the synergy of combining microplasma treatment with antibiotic therapy. The researchers are also designing a smaller, earbud-shaped jet array that will allow longer exposure times, and will also test the devices on animal models using biofilms of the other bacteria that cause middle ear infections, including Haemophilus influenzae, Moraxella catarrhalis, and Streptococcus pneumoniae. The study was published on June 2, 2021, in npj Biofilms and Microbiomes.

“Biofilms are very dense, making it difficult for the antibiotics to penetrate. Our idea was that if we could disrupt the structure of the biofilm, we could increase the penetration of the antibiotics,” said senior author professor of civil and environmental engineering Helen Nguyen, PhD. “We think that the microplasma disrupts the biofilm by disturbing the bacterial cell membrane. So far, we only have indirect measurements supporting our idea, but we will look into it in the future.”

Plasma is one of the four fundamental states of matter, the others being solid, liquid, and gas. When a gas is ionized, electrons are stripped from its atoms, turning it into plasma. The plasma contains charged particles: positive ions and negative electrons or ions, accompanied by dissociation of the atomic bonds.