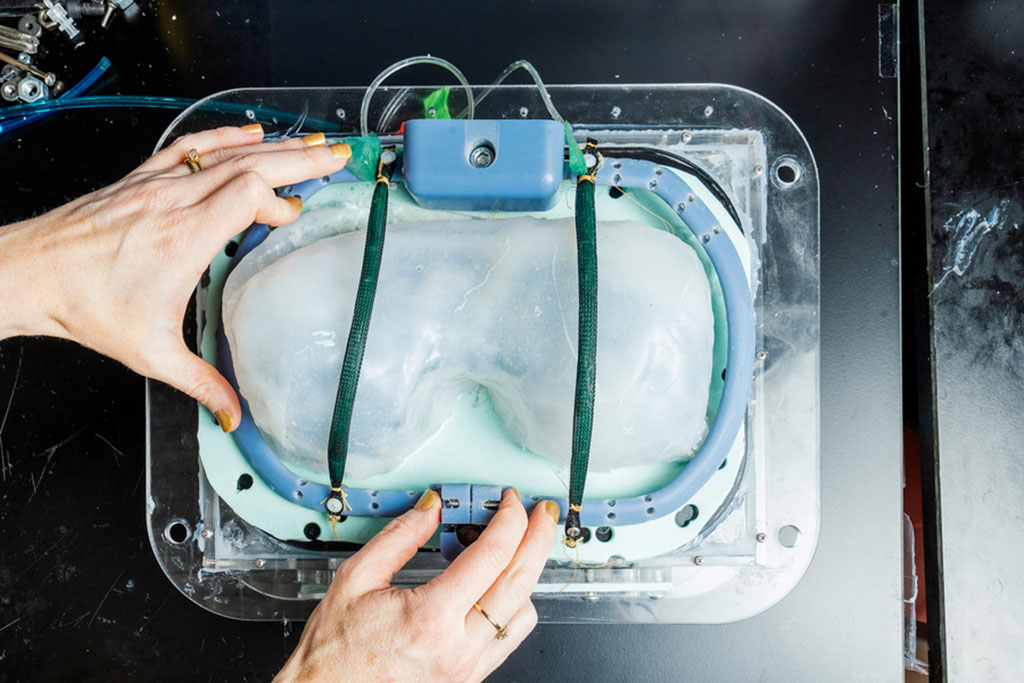 Image: The soft, implantable ventilator works with the diaphragm to improve breathing (Photo courtesy of MIT)

The diaphragm - the dome-shaped muscle that lies just beneath the ribcage - works like a slow and steady trampoline, pushing down to create a vacuum for the lungs to expand and draw air in, then relaxing as air is pushed out. In this way, the diaphragm automatically controls our lung capacity, and is the major muscle responsible for our ability to breathe. But when the diaphragm’s function is compromised, the breathing instinct becomes a laborious task. Chronic diaphragm dysfunction can occur in people with ALS, muscular dystrophy, and other neuromuscular diseases, as well as patients with paralysis, and damage to the phrenic nerve, which stimulates the diaphragm to contract. Now, a new proof-of-concept design by a team of engineers aims to one day boost the diaphragm’s life-sustaining function and improve lung capacity for people with diaphragm dysfunction.

The team of engineers at Massachusetts Institute of Technology (MIT, Cambridge, MA, USA) has developed a soft, robotic, and implantable ventilator that is designed to augment the diaphragm’s natural contractions. At the heart of the system are two soft, balloon-like tubes that can be implanted to lie over the diaphragm. When inflated with an external pump, the tubes act as artificial muscles to push down on the diaphragm and help the lungs expand. The tubes can be inflated at a frequency to match the diaphragm’s natural rhythm.

The researchers demonstrated the implantable ventilator in animal models, and showed that in cases of compromised diaphragm function, the system was able to significantly improve the amount of air that the lungs could draw in. There is still much work to be done before such an implantable system can be used to treat humans with chronic diaphragm dysfunction. But the preliminary results open a new path in assistive breathing technology that the researchers are eager to optimize.

“This is a proof of concept of a new way to ventilate,” said Ellen Roche, associate professor of mechanical engineering and a member of the Institute for Medical Engineering and Science at MIT. “The biomechanics of this design are closer to normal breathing, versus ventilators that push air into the lungs, where you have a mask or tracheostomy. There’s a long road before this will be implanted in a human. But it’s exciting that we could show we could augment ventilation with something implantable.”