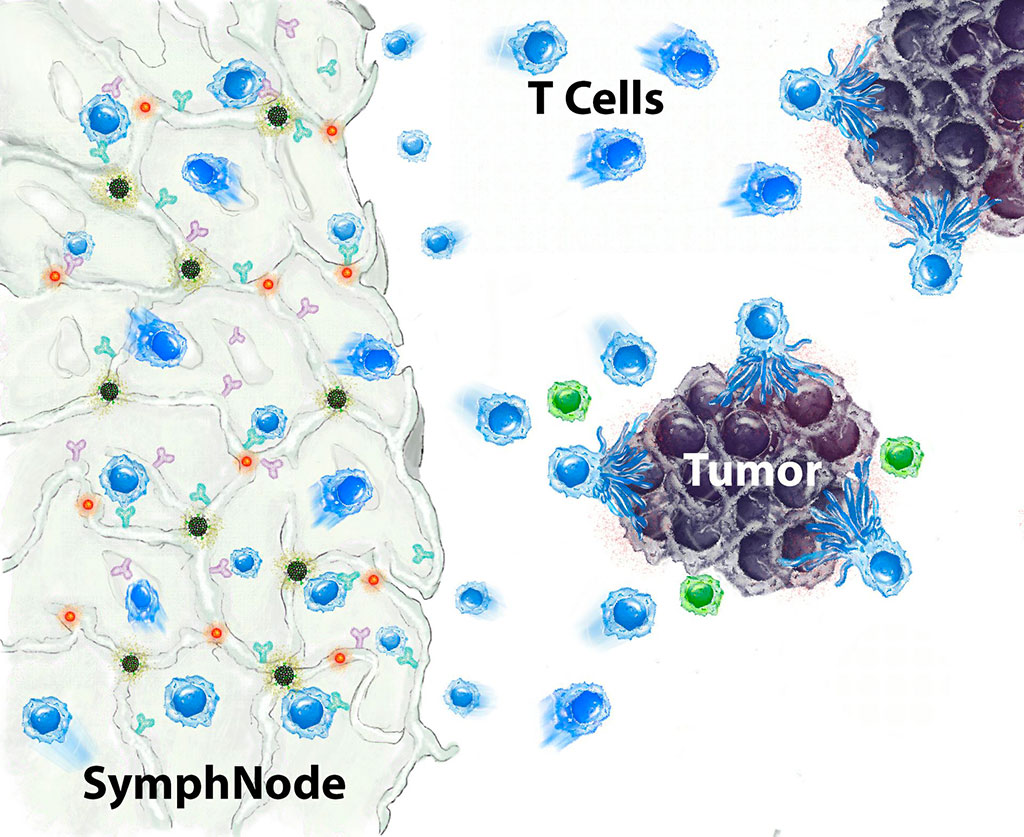 Many solid tumors resist treatment in part by turning human biology against itself. Tumors surround themselves with extra white blood cells known as regulatory T cells, which call off the body’s natural defenses against the disease. Strategies to treat cancer by deactivating these cells risk creating other serious problems. Since regulatory T cells play an important role in safeguarding healthy tissues, diminishing them throughout the body can lead to other immune cells mistakenly attacking these tissues and causing autoimmune conditions that damage the colon, liver, heart and other organs. Now, researchers have reported encouraging results in laboratory studies testing a tiny implantable device they call a SymphNode, which is designed to keep regulatory T cells in check only in the area around a tumor while summoning and strengthening tumor-fighting cells. The device was shown to drive tumors into remission, eliminate metastasis, prevent the growth of new tumors and result in longer survival in mice.

Designed by an interdisciplinary research team at UCLA (Los Angeles, CA, USA), SymphNode is a tiny biodegradable sponge about the size of a pencil eraser that is made from alginate, the same jiggly polymer used to thicken pudding. When surgically implanted directly next to a tumor, the sponge stimulates the body’s immune response against cancer in multiple ways: It slowly releases a drug that blocks the regulatory T cells in the tumor. At the same time, it attracts and beefs up the T cells that kill tumors. The material that the device is made of resembles a lymph node, a welcoming setting for cancer-fighting cells, and has pores lined with antibodies that further activate those cells.

The researchers tested the SymphNode in mouse models of both breast cancer and melanoma. With breast cancer, the device shrank tumors in 80% of mice and prevented the spread of cancer in 100% of them. In contrast, the cancer metastasized to the brains and lymph nodes of all mice in an untreated control group and killed all these mice within a few weeks. The researchers also found that placing a SymphNode next to one breast cancer tumor halted the growth of a second, simultaneous tumor at a different location in the body. In melanoma, the device shrank tumors in 100% of treated mice, with tumors decreasing to undetectable levels in more than 40% of cases. In both types of cancer, the treatment significantly extended the life span of mice, in many cases by more than twice that of untreated mice.

Most promising, the researchers demonstrated mice whose breast cancer was treated with a SymphNode and survived also resisted the growth of a second tumor injected 100 days after the first, indicating that the technology may decrease the risk of cancer returning. The researchers have attributed this to from the activity of memory T cells - immune cells “trained” by fighting the original tumor to quickly recognize and combat the same cancer if it comes back at a later time. The researchers believe that there are few, if any, cancer therapies currently on the market that seem to similarly enhance memory T cells and keep tumors from coming back. A smaller, injectable version of the SymphNode is currently under development that could serve as a potential addition to chemotherapy or other first-step treatments for a variety of cancers. The technology is expected to be initially applied to triple-negative breast cancer, an aggressive form of the disease that lacks targeted therapies, with clinical trials estimated to launch sometime in 2024.